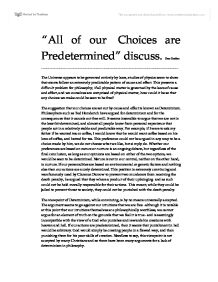 All of our Choices are Predetermined

One of the more successful attempts of Libertarianism to discredit Determinism is the pointing to laws of physics that do not seem to obey causality. Heisenberg's Uncertainty Principle shows distinct examples of elements of nature acting randomly, and not due to cause and effect. There are two main criticisms that can be made of this argument; One, that this principle only functions on an minute level, while actual objects such as people still obey determined laws of physics (although science has proven the principle can be amplified to affect people), and; Two, that even where actions random, there would still not be free will, while we would not live in a predetermined environment, we would still live in a (randomly) determined environment. If one was to roll a dice in order to decide the actions a prisoner should take, they would not be considered free by any means. The fundamental flaw of Libertarianism, is that when we examine how it would work, it seems to collapse. As all choices are made according to our personality, a serial killer, is only so because he has a serial killer's personality. ...read more.

But what would the effects of this be? Hard determinism would argue that we cannot claim to possess free will in a deterministic environment. The problem with this position seems to be that we have defined free will incorrectly. The view of free-will as indifference, has in the course of this essay been demonstrated as problematic, and if we adopt this view of free-will then hard determinism would seem an agreeable viewpoint, the problem is, that this seems an utterly meaningless way of discussing free will. Free will does not appear to refer to the ability of will to change itself, when we refer to a free lion, we do not mean it is free to change to a tiger or a bird, we simply mean it is free to act according to its nature. It would therefore seem to be more useful to discuss free will in the sense of "a will being able to act itself out", we are free if we could have chosen otherwise HAD our will been different. This Compatibilist approach adopted by David Hume seems to allow us to discuss free will in a meaningful way, within what seems to be a predetermined environment. ...read more.