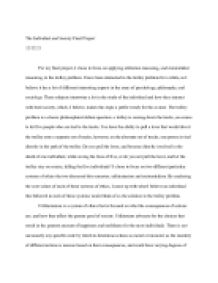 Applying Systems of Ethics to The Trolley Problem

ï»¿The Individual and Society Final Project 12/12/21 For my final project, I chose to focus on applying utilitarian reasoning, and existentialist reasoning, to the trolley problem. I have been interested in the trolley problem for a while, as I believe it has a lot of different interesting aspects in the areas of psychology, philosophy, and sociology. These subjects intertwine a lot in the study of the individual and how they interact with their society, which, I believe, makes this topic a perfect study for this course. The trolley problem is a classic philosophical debate question: a trolley is coming down the tracks, on course to hit five people who are tied to the tracks. You have the ability to pull a lever that would divert the trolley onto a separate set of tracks, however, on the alternate set of tracks, one person is tied directly in the path of the trolley. ...read more.

There is not necessarily any specific code by which to determine actions as moral or immoral; as the morality of different actions is moreso based on their consequences, and could have varying degrees of morality in different situations that result in different consequences. My initial thought was that a utilitarian would always pull the lever in order to save the five people; as five human lives would be more useful than one. However, as I pondered this thought, I realized that for a utilitarian, the consequences of this action could vary based on many different specifics. In delving deeper on the subject and considering variations of the original problem, I could see how utilitarian reasoning would change. However, I concluded that based on the core values of utilitarianism, usually, a utilitarian would choose to pull the lever and save five people, at the expense of one life. ...read more.

The trolley problem is a problem which the answer to varies based on the system of ethics that is applied by an individual to the problem. It was interesting to dive deeper into a philosophical problem that has been a topic of such great interest to me, as well as to apply the different systems of ethics that we have learned about over the semester. Personally, I tend to take a different approach to this problem; as I believe all human lives are equal, and therefore five lives is always greater than one. This belief most closely aligns with utilitarianism, although it does still vary slightly as usefulness could vary from individual to individual based on their capacity to contribute to society. The trolley problem is a really interesting way to learn about philosophy and human nature, as well as how the two interact and are intertwined. ...read more.