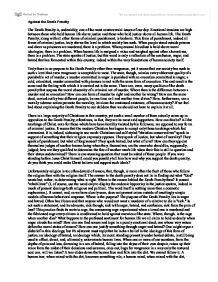 Arguing against the death penalty. Truly there is no purpose to the Death Penalty other than vengeance, yet it seems that our society has sunk to such a level that even vengeance is acceptable to most.

Against the Death Penalty The Death Penalty is, undeniably, one of the most controversial issues of our day. Emotional tensions are high between those who hold human life above justice and those who hold justice above all human life. The Death Penalty, along with all other forms of criminal punishment, is barbaric. This form of punishment, indeed all forms of criminal justice, truly shows the level to which society has sunk. When people stand outside prisons and cheer as prisoners are murdered, there is a problem. When personal bloodlust is held above moral ideologies, there is a problem. When human life is assigned a value and weighed against other alternatives, there is a problem. The state speaks of Justice, but this word is only a reflection of the confusion, anger, and hatred that has fermented within this country, indeed within the very foundations of human society itself. Truly there is no purpose to the Death Penalty other than vengeance, yet it seems that our society has sunk to such a level that even vengeance is acceptable to most. The state, though, mimics every abhorrent quality of a punishable act of murder; a murder committed in anger is punished with an execution committed in anger; a cold, calculated, murder committed with pleasure is met with the same form of execution. The end result is the same and the feeling with which it is carried out is the same. ...read more.

How can one justify something through anger and hatred? One might argue a disbelief in this ideology, but it's advocate must reply that he lacks a belief in the ideology of this form of justice; an ideology of hatred; an ideology which, its moral standing presently under heated debate, is still being used to affect, direct, and, ultimately, exterminate human lives. When one or more of our numbers, from the depths of pain and loss, drowning in a sea of hatred, falling into the abyss of their own despair, raises up their voice from the midst of their delusions and screams, cries out, begs for vengeance in a way only the tortured soul can, will we listen? A tear slides down the human face and falls into the dirt. We cannot follow it. A human tear, when mixed with the dirt, becomes something vile; a human mind, when mixed with the dirt, becomes something evil. Save for religion there are few other ideals people adhere to so fanatically as criminal justice. Among all other social concepts justice is unparalleled with respect to the level of effort which is expended in the pursuit of its fulfillment. It seems that the supporters of this barbarity are willing to hold it above all else. America has been rampantly executing immigrants from other nations without ever contacting their embassies, in complete defiance of international law. We have watched people burned alive in the electric chair in Florida. ...read more.

Orwell needed only one Goldstein to maintain his tyrannicism; the American government needs millions. Perhaps, in the Death Penalty as well as all other forms of criminal justice, our society finds an outlet of savagery and barbarity, a method by which we can legally lower ourselves to a point that has long been socially forbidden. The problem with falling so low so often though, is that, eventually, we will reach a level too low to return; a level so low as to merit the loss of the term human. Reciprocal Punishment is not the solution. This antiquated and barbaric eye-for-an-eye form of Justice is a primitive, savage, and ultimately mindless way of addressing the problem of crime. If law is supposed to be objective and independent from religion why is it based on these ancient and barbaric doctrines of a God that is more evil than divine? How can we defeat violence with violence? How can we defeat murder with murder? How can we defeat anger with anger? In doing so we merely assist the propogation of circumstances, the existence of which we claim we are trying to end, in our own actions and in our own minds. Have these foolish practices solved any of our problems? What of peace? Why, still, must people die? Perhaps if we go to the trouble of finding out we can end the problem, instead of having to delude ourselves into believing that murder will save the world. The road to peace is not paved with blood. Mankind must realize that peace bought with murder is not peace at all; it is merely the silence of death. ...read more.