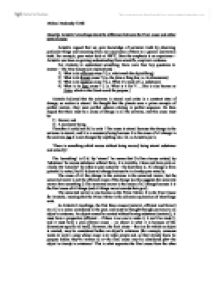 Aristotle - Forms of Cause and Causality

Describe Aristotle's teachings about the difference between the Final cause and orther sorts of cause Aristotle argued that we gain knowledge of universal truth by observing particular things and reasoning from our experience of them to a general (universal) truth. For example, pure water boils at 100oC. Here the emphasis is on experience - Aristotle was keen on gaining understanding from scientific, empirical evidence. For Aristotle to understand something, there were four key questions to answer - The Four Causes (or explanations) : 1) What is its efficient cause ? (i.e. what made the object/thing) 2) What is its formal cause ? (i.e. the form a thing has i.e. its dimensions) 3) What is its material cause ? (i.e. What it's made of i.e. substance) 4) What is its final cause ? ( i.e. What is it for ?! ...This is also known as Telos, which is the Greek word for purpose.) Aristotle believed that the universe is eternal and exists in a constant state of change, so motion is eternal. He thought that the planets were a prime example of perfect motion ; they were perfect spheres rotating in perfect sequence. He then argued that there must be a cause of change in all the universe, and this cause must be : 1) Eternal, and 2) ...read more.

This is what separates the final cause from the other three causes ! For example, even though humans have been around for a long time, people are still asking the questions : 'What is the meaning of life ?', and 'Why are we here ?'. Even though Aristotle may claim to have answered those questions, the point is that we can exist even without knowing our purpose, even though all the other three purposes are actualised. In fact, many people probably go through life never pondering their personal final cause and not even pursuing its fulfillment ! Aristotle also suggests that the Final Cause leads to movement like the action of being loved ; love is not just about your actions but also about attraction. The Prime Mover is the ultimate reason and final goal of movement. An analogy to understand this may be of a magnet that will attract iron objects towards it. Aristotle says that all action is ultimately aimed at the Prime Mover and this is like attraction because the Prime Mover is the cause of all motion. It causes motion as the object of desire and love. The way that this may link to the other sorts of cause as described by Aristotle is that the Prime Mover being the Final Cause is inextricably linked with motion. ...read more.

Even if you try to argue for Aristotle by saying that he liked to prove things scientifically, so by looking at a brick's weight and dimensions it is clear that it's primary purpose is for building, you could just as easily argue that a brick is ideal for smashing the shop window. There is many who would say that there is no reason, and that things happen purely by chance. With regard to Aristotle's view on the planets being the perfect example of perfect motion, many people believe that the universe came about by an (albeit infinitesimally small) chance. They think that it is ridiculous to suppose that the universe has any meaning or purpose beyond the simple fact of its existence. Aristotle views G-d as the Prime Move, or uncaused causer. Some criticise this view, arguing that his views depend on the idea that nothing can cause itself, but then contradicts itself by saying that G-d does exactly what it just claimed was impossible. Aristotle further teaches that as G-d is the Prime Mover he only needs contemplate himself ; in fact he has to. However he does not successfully explain how his concept of G-d as 'thinking about thinking' could be responsible for causing movement. He stressed that real konwledge begins with experience via the sneses, and yet none of us have ever experienced something being moved just through the agency of thought, outside the world of fiction. Michael Bodansky 12HS ...read more.