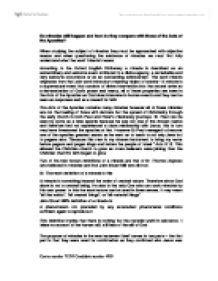 Do miracles still happen and how do they compare with those of the Acts of the Apostles? When studying the subject of miracles they must be approached with objective reason and when questioning the existence of miracles we must first fully understand what the word 'miracle' means. According to the Oxford English Dictionary a miracle is described as an extraordinary and welcome event attributed to a divine agency, a remarkable and very welcome occurrence or as an outstanding achievement. The word miracle originates from the Latin word miraculum meaning 'object of wonder.' A miracle is a supernatural event that consists of divine intervention into the natural order as a demonstration of God's power and mercy, all of these properties are seen in the Acts of the Apostles as God does intervene in human events and they can be seen as responses and as a reward for faith. The Acts of the Apostles contains many miracles however all of these miracles are not the healing of those with demons but the spread of Christianity through the early church in both Paul and Peter's missionary journeys. St. Paul can be seen by some as a fake apostle because he was not one of the chosen twelve and therefore had not experienced a close relationship with Jesus, this is turn may have threatened the apostles at first. ...read more.

Although miracles benefited the individual, their true purpose was for confirmation, even though they were often motivated by compassion and belief of those observing. Today some people may believe that miracles still do happen but not in such a magnificent way as they did back in the time of Jesus. People do nevertheless believe that in order to receive a miracle you must have a strengthened relationship with God through prayer and acting on spirit. Some people may argue with the second circumstance in the sense that they cannot strengthen their faith in God because there are no miracles today that allow them to expand their belief. On the other hand some would say that miracles still do happen today through the work that Doctors, surgeons etc. can do which in apostolic times would have been regarded as miracles. A modern miracle story would be that of an atheist couple and their little girl, the couple never told their daughter anything about the Lord. One night when the little girl was 5 years old, the parents fought with each other and the dad shot the Mother, in front of the child. Then, the dad shot himself. The little girl watched it all. She then was sent to a foster home. The foster mother was a Christian and took the child to church. ...read more.

I personally believe that these modern day miracles allow peoples faith in God to be strengthened as it allows us to understand that if we need it - even if we do not want it God will be there for us. Both of these miracles found in Acts are important to Christians today as they are a sign of God's power, they also show that Jesus lives and has power through the Holy Spirit and the invocation of his name. David Hume however is the arch-enemy of miracles who said that "A miracle is a violation of the laws of nature" he also said that "It is no miracle that a man, seemingly in good health, should die suddenly: because such a kind of death, though more unusual than any other, has yet been frequently observed to happen. But it is a miracle that a dead man should come to life; because that has never been observed in any age or country. There must, therefore, be a uniform experience against every miraculous event; otherwise the event would not merit that appellation." However I do not agree with David's Hume's views and myself I believe that a miracle is a God-powered supernatural event. Overall I believe miracles today and miracles in Acts of the Apostles contrast well with each other as they are both God centred and can be directed at both believers and non-believers. ...read more.