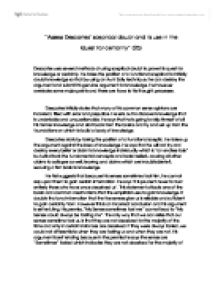 "Assess Descartes' sceptical doubt and its use in the Quest for certainty" (25) Descartes uses several methods of using sceptical doubt to prove his quest for knowledge or certainty. He takes the position of a functional sceptical to initially doubt knowledge so that by using an Aunt Sally technique, he can destroy the argument and submit his genuine argument for knowledge. He however overlooks some major points and there are flaws to his thought processes. Descartes initially states that many of his common sense opinions are incorrect, filled with error and prejudice. He sets out to discover knowledge that is undeniable and unquestionable. He says that he is going to strip himself of all his former knowledge and start back from the basics and try and set up from the foundations on which to build a body of knowledge. Descartes starts by taking the position of a Functional sceptic. ...read more.

The knowledge he is seeking is for definite certainty and is right in the fact that your senses cannot do that. Descartes moves to the second wave of doubt which pushes the process of doubt even further. He says that he "often has dreams which are very like real life and that he is unaware that he is dreaming". This again attacks the empiricist and strips him of the fundamental experience to gain knowledge. The fundamental criticism with this argument is that it is self refuting. He says "I am sometimes unaware I am dreaming" which he then leads to "I may always be dreaming". This is a contradictory statement. You could also point out that the definition of a dream is "a state of mind characterized by abstraction and release from reality". This therefore means that if all life was a dream, there would be no reality, nothing to differentiate between reality and a dream with. ...read more.

Because he is able to doubt, there must be something that is doing the doubting, and therefore he exists. However this solution is flawed for one reason, that he is using his logic to deduce this. Descartes believes he has defeated the malicious demon and therefore has set the base on which to build his argument for knowledge. However in truth, the skeptical argument against knowledge still stands, preventing any arguments for knowledge to exist. This means that everything else he starts to create off the statement is unjustified. This flaws his progression to find absolute certainty of knowledge. In conclusion, Descartes has a very good method on which to discover absolute certainty. His plan to destroy all foundations of knowledge which allows him to rebuild his ideas upon is a very good way to gain certainty. However he overlooks some major points and there are flaws in his thought processes. He almost rushes through the initial skeptical argument to show his actual argument and does not fully explore the possibilities. This halts his ultimate progression in his Quest for Certainty. ...read more.