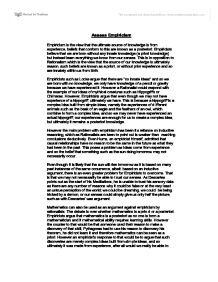 Assess Empiricism Empiricism is the view that the ultimate source of knowledge is from experience, beliefs that conform to this are known as a posteriori. Empiricists believe that we are born without any innate knowledge (a priori knowledge) but instead learn everything we know from our senses. This is in opposition to Rationalism which is the view that the source of our knowledge is ultimately reason, such beliefs are known as a priori, or without prior experience and so are innately within us from birth. Empiricists such as Locke argue that there are "no innate ideas" and so we are born with no knowledge, we only have knowledge of a pencil or gravity because we have experienced it. However a Rationalist could respond with the example of our ideas of mythical creatures such as Hippogriffs or Chimeras. However, Empiricists argue that even though we may not have experience of a hippogriff, ultimately we have. This is because a hippogriff is a complex idea built from simple ideas, namely the experiences of different animals such as the beak of an eagle and the feathers of an owl, ...read more.

are any number of reasons why it could be false or at the very least an untrue perception of the world; we could be dreaming, we could be being tricked by a demon, or our senses could simply give us only half the picture, such as with Descartes' wax argument. Mathematics can also be used as an argument against empiricism by rationalists. The debate is over whether mathematics is a priori or a posteriori. Empiricists argue that mathematics is a posteriori as no one is born a mathematician and it mathematical ability requires learning skills. However the counter to that would be that someone used their reason to make a discovery of that skill, Pythagoras had to use his reason to discovery his theorem, he did not learn it and therefore mathematics can be seen as a priori. However an empiricist's response to that would be to argue that such discoveries are merely complex ideas built from simple ideas, and so ultimately it was made from experience, after all would we really be able to reason mathematically without having learnt numbers and basic skills such as addition and subtraction? ...read more.

Socrates managed this, albeit using quite suggestive questions which prompted the slave boy towards the conclusion but it nevertheless illustrates the principle that mathematical conclusions can be reached through a priori means and so mathematics is a priori. However others, such as Hume, who was an empiricist, argued that some concepts were a priori but only because they are also analytic. An analytic statement is one where the predicate is contained within the subject, such as "all bachelors are unmarried". A synthetic statement describes propositions in which the predicate is not contained within the subject, such as "this book is purple". Hume argued that some beliefs were a priori and others were a posteriori. However there some flaws with Hume's fork, such as the Cogito which does not seem to fit into the fork. Overall, I agree with Hume, in thinking that knowledge altogether is either a priori or a posteriori but more a mixture of the two. Mathematics would be a good example of knowledge that is a priori, whilst language would be an example of knowledge that is a posteriori. It would be foolish to think that all knowledge was either one or the other. ?? ?? ?? ?? ...read more.