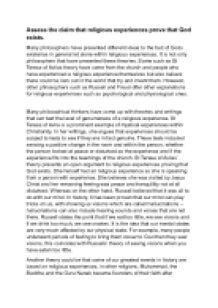 Assess the claim that religious experiences prove that God exists.

It is the idea that our mental states are very much affected by our physical state. For example, many people underwent periods of fasting to bring them closer to God then they saw visions, this coincides with Russellsâ€™ theory of seeing visions when you have eaten too little. Another theory could be that some of our greatest events in history are based on religious experiences, in other religions, Muhammad, the Buddha and the Guru Nanak became founders of their faith after religious experiences. Muhammad was believed to have revelations from Allah, this led him to find Islam and write the Quran in Arabic â€“ repeating word for word what God had said to him. A Christian example would be that Bernadette of Lourdes witnessed the Virgin Marys presence and was believed to be told that she should dig for fresh spring water, Bernadette did this and found such water and it is now still a worldly attraction for humans. ...read more.

This is a theory against religious experiences proving that God exists. In conclusion, many different thinkers have different views on religious experiences some such as Freud and Russell believe that it is psychological or physiological and that people do not have such visions but yet they make them up themselves in their own mind. But then, others believe that religious experiences do exist but yet only some out of all the claims are true and they themselves have come up with tests to see what is real and what is not. This subject is an interesting one but yet a very controversial one. Proving that religious experiences prove the existence of God has always been and will always be complex mainly because of peoples views but also because there is no definite test or assessment to analyse the truth of Gods existence. I didnâ€™t have time for a third paragraph â€“ but donâ€™t worry I do know one is missing! Ã° ...read more.