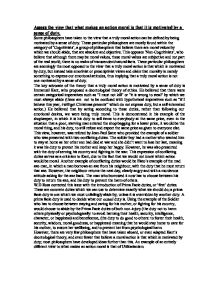 Assess the view that what makes an action moral is that it is motivated by a sense of duty.

However, the neighbour returns the next day, clearly angry and with a murderous attitude asking for the axe back. The man who borrowed it now has to choose between his duty to return the axe, and his duty to prevent the harm of others. W.D Ross corrected this issue with the introduction of Prima Facie duties, or 'first' duties. These are concrete duties which we can use to determine exactly what we should do; a prima facie duty is one which we must unfailingly abide by, unless it is overridden by another duty. A prima facie duty is used to decide what our actual duty is. Using the example of the Soldier who has to choose between staying and caring for his mother, or fighting for his country, would choose to abide by the Prima Facie duties of both non-injury (the duty not to harm others physically or psychologically: to avoid harming their health, security, intelligence, character, or happiness) and beneficence, (the duty to do good to others: to foster their health, security, wisdom, moral goodness, or happiness) ...read more.

This is backed up/followed by emotivism, which also states that our moral beliefs are purely our emotional takes on things which have happened. This view was mainly taken by AJ Ayer, who came up with the "boo-hurrah" theory, which was that there could be an action, such as abortion, and one person could say "boo, abortion" whilst the other could say "hurrah, abortion", which are their separate ideas on whether it is moral or not, but the the only fact that really appears is that there was an abortion. The view that what makes an action moral is that it is motivated by a sense of duty appears flawed. The fact that duties can be conflicted, and in certain cases can lead us to wrong actions (such as presented in the mad axe man example) makes it seem as though it cannot fully account for morality. It seems more like the views of Hume and Ayer that morality is in fact just an emotional reaction to an event seems more realistic and can account for a lot more. ...read more.