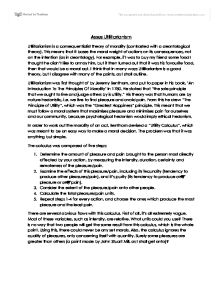 a***s Utilitarianism Utilitarianism is a consequentialist theory of morality (contrasted with a deontological theory). This means that it bases the moral weight of actions on its consequences, not on the intention (as in deontology). For example, if I was to buy my friend some food I thought he didn't like to annoy him, but it then turned out that it was his favourite food, then that would be a moral act. I think that in many ways Utilitarianism is a good theory, but I disagree with many of the points, as I shall outline. Utilitarianism was first thought of by Jeremy Bentham, and put to paper in his book, 'An Introduction To The Principles Of Morality' in 1780. He stated that "the sole principle that we ought to live and judge others by is utility." His theory was that humans are by nature hedonistic, i.e. we live to find pleasure and avoid pain. From this he drew "The Principle of Utility", which was the "Greatest Happiness" principle. This meant that we must follow a moral system that maximises pleasure and minimises pain for ourselves and our community, because psychological hedonism would imply ethical hedonism. ...read more.

These criticisms all add up to make this theory very vague and overcomplicated. I support certain elements of it, such as the fact that it's humane and takes emotion strongly into account. Bentham's Utilitarianism is known as 'Act Utilitarianism', because it focuses on individual acts, and that every situation should be approached differently. It's quite weak since it's lack of rules seem to make it lost it's very definition as a moral theory, since they should be based on set rules (although maximise happiness may be that rule). Also, an act can be considered right/wrong completely independently of pleasure/pain. There are other things which can define the morality of an act. The theory also assumes that all beings are equal, though in reality personal relationships will alter this drastically (given the choice, you would save a family member from death over a stranger). I believe this theory is far too weak, vague and imprecise to be of any real use, and its apparent simplicity is non-existent. John Stuart Mill attempted to solve many of these problems with his modifications on the theory. ...read more.

It is also impossible to define these higher or lower pleasures, meaning the theory is still quite vague, and doesn't quite hold up as a moral theory (as criticised by David Hume and G.E. Moore). There have been several modern adaptations of Utilitarianism, including the split between positive and negative. Positive focuses on increasing happiness, whilst negative aims to decrease unhappiness, lending a certain flexibility. Henry Sidgwick proposed Ideal Utilitarianism, where he introduced other principles or values to the greatest happiness principles, such as justice or generosity (making this akin to a theory of virtue). However, this does mean abandoning strict hedonism, which lies at the foundation of Utilitarianism. Moore did agree with this theory, acknowledging that "good cannot be defined purely by happiness or pleasure." The final theory, and the one which I most prefer within Utilitarianism is Preference Utilitarianism. Peter Singer is generally regarded as the father of this theory, with influence from R. M. Hare. It is the most popular contemporary theory of Utilitarianism, and it is understandable since it is the most purely moral, and in many ways modern theory. It is based not on producing the greatest happiness, but instead on maximising the satisfaction of all people involved. ...read more.