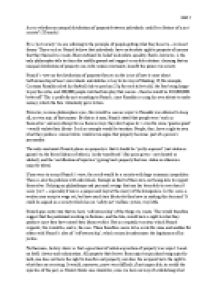 ï»¿3/6/15 Assess whether an unequal distribution of property between individuals could be a feature of a just society? (50 marks) By a ‘just society’ we are referring to the principle of people getting what they deserve – or desert theory. Those such as Nozick believe that individuals have an absolute right to property of income that they themselves create; Marx outlined his belief in absolute equality; Rawls, however, is the only philosopher able to claim the middle ground and suggest a sensible solution: claiming that an unequal distribution of property can, with certain constraints, benefit the poorest in society. Nozick’s view on the distribution of property focuses on the issue of how it came about. Self-ownership of one’s own talents and abilities is key to his way of thinking. If, for example, Cristiano Ronaldo asked his football club to pay him 25p for each ticket sold, the fans being happy to pay the extra, and 400,000 people watched him play that season – then he would be £10,000,000 better off. This is perfectly just according to Nozick, since Ronaldo is using his own talents to make money; which the fans voluntarily gave to him. However, in some philosophers eyes, this would be seen as unjust is Ronaldo was allowed to keep all, or even any, of that money. ...read more.

It would, moreover, prove very difficult, if not impossible, to rectify the injustice of the past, as Nozick thinks one should do, since we have no way of establishing what belongs to who in many cases. The conclusion we are forced to draw is that Nozick?s theory has no application if we cannot start from a just beginning. Marx, on the other hand, focused on the plight of the proletariat, who, having nothing but their labours to sell are exploited by the bourgeoisie; who are in turn protected by the state which keeps private property legal: allowing a small number of individuals to own the ?commanding heights? or means of production. In such circumstances people cannot make use of their right to ?self-ownership? as Nozick claims, for they are creating items for the profit of the bourgeois and not themselves. Marx therefor believed in a needs based theory of justice. This would entail the abolition of private property and see that every man, woman and child gets what they need and gives what they can. The principle can be summed up as thus, ?from each according to his ability, to each according to his needs.? Property does, however, seem to come naturally to human beings with philosophers such as John Locke claiming it is a ?Natural Right?. ...read more.

Importantly, Rawls thinks that once a certain level of martial wealth has been acquired (£26,000 a year in the UK), then we would value such legal and foundational rights more; as well as basic liberties such as freedom of speech and association. Thus liberty will be preferred to less liberty, but greater wealth. This leads to Rawls’ ‘difference principle’, that we would choose to maximise the minimum level of welfare. This would create a society with a smaller gap between the rich and the poor, but also a smaller average wealth. One can object to this and state that it makes more sense to maximise the average level of wealth, especially if there is equality of opportunity meaning that one can improve oneself. However, one could imagine a society which is less prosperous, but more ‘just’ –something based alone the lines of Marx’s desert theory. Conversely, however, justice, in terms of the distribution of property, actually comes from prosperity and wealth creation gained and produced by some, so that others can benefit from the resulting taxation of said people. In conclusion, only Rawls can offer a theory of justice that appears sensible to the rational egotistical being; as well as avoiding the un-pragmatic approaches of Marx and Nozick. Even is one does not accept Rawls’ theory of justice – for one may be very rich and have lots of land – then at least it shows one what justice should look like. ...read more.