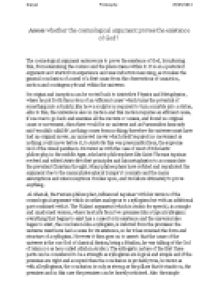 Assess whether the cosmological argument proves the existence of God.

﻿Daryan Philosophy 29/09/2013 Assess whether the cosmological argument proves the existence of God? The cosmological argument endeavours to prove the existence of God, by inferring this, from examining the cosmos and the phenomena within it. It is an a posteriori argument as it starts from experience and uses inductive reasoning, as it makes the general conclusion of a need of a first cause from the observations of causation, motion and contingency found within the universe. Its origins and inception can be rooted back to Aristotle?s Physics and Metaphysics, where he put forth the notion of an ?efficient cause? which turns the potential of something into actuality, like how a sculptor is required to turn a marble into a statue, akin to this, the universe is also in motion and this motion requires an efficient cause, if one was to go back and examine all the movers or causes, and found no original cause or movement, then there would be no universe and as Parmenides famously said ?ex nihilo nihil fit?, nothing comes from nothing; therefore the universe must have had an original mover, an unmoved mover which itself required no movement as nothing could move before it, to Aristotle this was presumably Zeus, the supreme God of the Greek pantheon. However as with the case of most of Scholastic philosophy, in the middle Ages, scholastic philosophers like Saint Thomas Aquinas evolved and edited Aristotle?s first principles and his metaphysics to accommodate the prevalent Christian thought. ...read more.

if that were true then there would be no consequent causes, but he claims this is false; therefore there must be a first cause which is the groundwork for all causes, whom we call God. These arguments have conspicuous weaknesses which greatly undermine and abate the argument. Firstly both of the arguments in some way rest upon a contradiction, in that Aquinas says that everything must have a cause as ex nihilo nihil fit, nothing comes from nothing, but then concludes that something must exist that can be the cause of itself, this is quite a glaring contradiction, but this is precisely what Aquinas utilises the reductio ad absurdum to do, to show that if there was not a self-causing first cause then it would lead to an infinite regress, which is not possible, and that God is a special being which can be reasonably posited and is the exception to the aforementioned rule. However if we are acquiescing to exceptions, why make the God of classical theism the exception, is it not more reasonable to make the universe the exception to this ?rule?, and then we could conclude that the universe just is and has no cause but caused itself, and there would be no need to postulate the need for a God. As Hume said ?It were better, therefore, never to look beyond the present material world.?, so seeking explanations that go beyond the peripheries of the physical world will only lead to infinite regresses, and that we which should either: accept no explanation or find an explanation within the universe itself. ...read more.

Some would argue that as the Big Bang did not ?exactly? cause the universe but was the first thing inside the universe, so it cannot be an adequate explanation. However the concept of causation is contingent to the concept of time and if one were to ask what caused or what was before the Big Bang, then that would be nonsensical as the Big Bang is the beginning of time and how could anything precede time, to have before and after, you require time. Therefore modern science poses a big challenge for cosmological arguments, as it undermines the claim that God is the cause of the universe. In conclusion, the cosmological argument does have its strengths, as evidently it has stood the test of time, from Aristotle living around two thousand three hundred years ago, to being revived by Aquinas and Al-Ghazali around a thousand years ago up until the present day and age, requires one to acknowledge that it is an interesting and respectable argument. Also it seems to be quite universal, as philosophers of different religions have used it; Aristotle being a Pagan, Aquinas a Christian and Al-Ghazali a Muslim manifests this. However as it is rather evident many of them rest on unreliable foundations and expose themselves to many criticisms, overall the weaknesses outweigh and overshadow the meagre strengths. Even so, if it were to succeed in proving the existence of a first cause, it never goes to show us why such a being would be worthy of worship. Ultimately it does not prove the existence of God. ...read more.