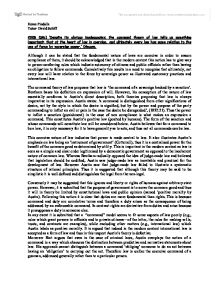 Austin's theory of law is based on coercio

2008 Q2a) 'Despite its obvious inadequacies; the command theory of law tells us something important: that at the heart of law is coercion, and ultimately every law has some relation to the use of force by sovereign power.' Discuss. Although it can be stated that the fundamental nature of laws are coercive in order to ensure compliance of them, it should be acknowledged that in the modern context this notion has to give way to power-conferring rules which indicate autonomy of citizens and public officials rather than having an obligation to follow commands. Cumulatively this results in a need to recognise that ultimately, not every law will have relation to the force by sovereign power as illustrated customary practices and international law. The command theory of law proposes that law is 'the command of a sovereign backed by a sanction'. Bentham bases his definition on expression of will. However, his conception of the nature of law essentially conforms to Austin's direct description; both theories proposing that law is always imperative in its expression. Austin states: 'a command is distinguished from other significations of desire, not by the style in which the desire is signified, but by the power and purpose of the party commanding to inflict an evil or pain in the case the desire be disregarded', (1832:21). Thus the power to inflict a sanction (punishment) ...read more.

It can be argued that realistically in the present context it is beneficial to recognise 'dominium powers' to distribute rewards so as to promote and enhance compliance with laws (Terence Daintith). Moreover Austin's claim that sanctions are analytically essential to laws, meant that a sanction can be 'the smallest chance of incurring the smallest evil'. Thus any disadvantage formally specified directly or indirectly by law, in the case of non-compliance can serve as that law's sanction. A sanction could also lead to a further obligation but at the end of the chain a sanction must be present. The major criticism of Austin's conception of commands arose from 'power-conferring' rules ('secondary rules' in Hart's terms). These include legal rules enabling people to make wills, or contracts or enter into other desirable and facilitative transactions that would lack security without legal guarantee (private power-conferring rules). They also include public power conferring rules (power given to officials). Hart criticises Austin's theory by stating that these kinds of rules are not coercive but rather, they facilitate desirable activities. They are not duty imposing rules supported by penalties but enable officials or private citizens to act. Austin's defence of this criticism was that private power-conferring rules have sanctions in the form of 'nullity of transactions'. Therefore a will executed in violation of the formalities will not achieve legal effect as it will be held void in whole or part. ...read more.

However Austin's counter-argument would be to say that ultimately all law relates to the sovereign authority. An example of this is his concept of delegation of sovereign power. Austin claims that power is delegated to private citizens, the judiciary and each delegation is a legitimate exercise of power to create legal obligations but ultimately it must be treated as a tacit command of the sovereign. Hart has claimed that this notion of tacit commands is unrealistic in the case of judicial law making as it blurs the distinction between separation of powers. However one could put this down to the fact that Austin's critics treat his sovereign as legal, when it is a pre-legal notion. In conclusion, I believe that a theory based purely on coercion fails to distinguish rules of terror from rules which are accepted as being created by a legitimate government for citizens. The theory fails to illustrate the difference between a law that 'obliges' a person to obey it and one where there is an 'obligation' imposed. Rather, it reduces them into a narrow concept; that they should be habitually obeyed or else a sanction will follow. Although it may be illustrated Austin's model is an attempt to distinguish legal orders from moral orders, and that coercion is a fundamental nature of law, we must recognise that in the modern context the abundance of legislation has not only created facilitative rules to enable humans to benefit from transactions but has also meant that legislation may also be created by various institutions. ?? ?? ?? ?? Hema Pindolia Tutor- David Schiff ...read more.