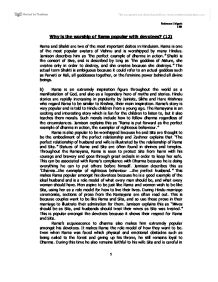 b) Why is the worship of Rama popular with devotees? (12)

Why is the worship of Rama popular with devotees? (12) Rama and Shakti are two of the most important deities in Hinduism. Rama is one of the most popular avatars of Vishnu and is worshipped by many Hindus. Jamison describes him as "the perfect example of dharma in action." Shakti is the consort of Siva, and is described by Ling as "the goddess of Nature, she creates only in order to destroy, and she creates because she destroys." The actual term Shakti is ambiguous because it could refer to an actual goddess such as Parvati or Kali, all goddesses together, or the feminine power behind all divine beings. b) Rama is an extremely inspiration figure throughout the world as a manifestation of God, and also as a legendary hero of myths and stories. Hindu stories are rapidly increasing in popularity by Jainists, Sikhs and Hare Krishnas who regard Rama to be similar to Krishna, their main inspiration. Rama's story is very popular and is told to Hindu children from a young age. The Ramayana is an exciting and interesting story which is fun for the children to listen to, but it also teaches them morals. ...read more.

During Hindu marriage ceremonies, sections of prose from the Ramayana are often read out. This is because couples want to be like Rama and Sita, and so use these prose in their marriage to illustrate their admiration for them. Jamison explains this as "Wives should be as Sita, and husbands should treat their wives as Sita was treated." This is popular amongst the devotees because it shows their respect for Rama and Sita. Rama's acquiescence to dharma also makes him extremely popular amongst his devotees. It makes Rama the role model of how they want to be. Even when Rama was faced which physical and emotional obstacles such as being exiled to the forest and giving up his throne, he still remains loyal to Dharma. During this time he also remains faithful to his wife Sita and is careful in protecting her from harm. He spends a whole year searching from her when she is kidnapped which helps to demonstrate the strength of his devotion and loyalty to her because he didn't give up. This makes him popular with devotees because they see Rama's actions as the perfect example of how they should act and what life should be like. ...read more.

The re-enactments of the story of Rama and Sita are considered to be of extreme importance and the main highlight of the day because all of the children go to watch and are fascinated by the stories and colourful costumes worn in the celebrations. In conclusion, the deities mentioned in this essay are just some of the many branches and methods of worshipping and following Hinduism. Zaehner describes Hinduism as a "many headed animal" which can be seen to be extremely applicable here because Rama and Shakti are just two or the many heads in Hinduism. Rama is the ideal hero, son, husband and warrior and is a role model of what male devotees aspire to be like, and female devotees aspire to marry. Rama's festivals are fun-filled, joyous occasions. His perfect relationship with Sita is the embodiment of what all marriages should be like, which is deeply respected by his devotees. Zaehner's description of Rama is accurate in illustrating why devotees love him so much, In the Ramayana we are shown what the Hindus conceive to be a perfect life - the life lived by the God Vishnu in his incarnation as Rama." ?? ?? ?? ?? Rebecca Lidgett L6H 1 ...read more.