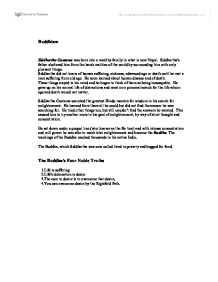 Buddhism Siddhartha Guatama was born into a wealthy family in what is now Nepal. Siddhartha's father sheltered him from the harsh realities of the world by surrounding him with only pleasant things. Siddhartha did not know of human suffering, sickness, advanced age or death until he met a man suffering from old age. He soon learned about human disease and of death. These things stayed in his mind and he began to think of them as being inescapable. He gave up on his normal life of distractions and went on a personal search for the life where age and death would not matter. Siddhartha Guatama searched the greatest Hindu masters for wisdom in his search for enlightenment. He learned from them all he could but did not find the answer he was searching for. He tried other things too, but still couldn't find the answers he wanted. This caused him to try another route to his goal of enlightenment, by way of strict thought and concentration. He sat down under a peepul tree (later known as the Bo tree) and with intense concentration and will power he was able to reach total enlightenment and become the Buddha. The teachings of the Buddha reached thousands in his native India. The Buddha, which Siddhartha was now called lived in poverty and begged for food. The Buddha's Four Noble Truths 1.Life is suffering 2.Life's dislocation is desire 3.The cure to desire is to overcome that desire, 4.You can overcome desire by the Eightfold Path. ...read more.

Each category is like a roadmap to help you find the right path to God. You may be on the correct road but at the wrong time. Islam Islam is very similar to Judaism. Both share the common ancestry of Abraham. The main points of Islam are included in these five pillars: The Five Pillars of Islam: 1. The confession that "there is only one God, and Muhammad is His Prophet. 2. Prayer. Muslims must stay constant in prayer and keep their lives in perspective. Prayer must be done five times a day. 3. Charity is the third pillar of Islam. Islam understands that not everyone is financially equal and the Koran states that 2 1/2 % or an annual one-fortieth of the middle and upper class' income and holdings should be given to the poor. 4. Ramadan. This is the month on the Islamic calendar and it is a time for fasting during daylight hours. During evening hours food may be taken in moderation. The point behind fasting is to make you think, to teach self discipline, underscores your dependence on God, a reminder of human frailty and dependence and sensitizes compassion by allowing one to share the feeling of hunger. 5. Pilgrimage. Once during his or her lifetime men and women should make the pilgrimage to the holy city of Mecca where God's revelation was first revealed if they are physically and financially able. The purpose is to heighten one's devotion to God. ...read more.

The New Testament holds that after he had died Jesus' body was taken from the cross and placed in a tomb. Three days later, when some women came with spices to embalm the body, they found the tomb empty. An angel who kept watch told them that Christ had risen from the dead. He spent 40 days on Earth after his resurrection and then was taken up to heaven. Belief in Jesus' resurrection from the dead became the focus of Christianity, the religion that developed around his teachings. Jesus Christ has been the accepted incarnation of God to followers of the Christian faith for nearly 20 centuries. Judaism Around 2000 BCE, the God of the ancient Israelites established a divine covenant with Abraham, making him the father of many nations. Moses was the next leader of the ancient Israelites. He led his people out of captivity in Egypt, and received the Law (10 Commandments) from God. The 10 Commandments 1. Worship no god but me 2. Don't make yourselves images 3. Don't use my name for evil purposes 4. Observe the Sabbath 5. Respect your Father & Mother 6. Don't commit adultery 7. Don't Kill 8. Don't steal 9. Don't accuse anyone falsely 10. Don't desire another man's house After decades of wandering through wilderness, Joshua led the tribes into the promised land, driving out the Canaanites through a series of military battles. There are currently about 18 million Jews throughout the world. They are mainly concentrated in North America (about 7 million) and Israel (about 4.5 million). ...read more.