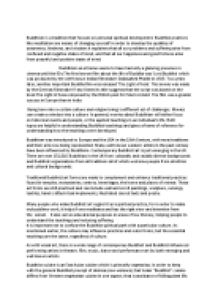 Buddhism in culture and media around the world.

﻿Buddhism is a tradition that focuses on personal spiritual development. Buddhist practices like meditation are means of changing yourself in order to develop the qualities of awareness, kindness, and wisdom.It explaines that all our problems and suffering arise from confused and negative states of mind, and that all our happiness and good fortune arise from peaceful and positive states of mind. Buddhism as a theme seems to have had only a glancing presence in cinema until the 90s.The first known film about the life of Buddha was ?Lord Buddha? which was produced by the well-known Indian filmmaker Dadasaheb Phalke in 1923. Two years later, another important Buddha film was released ?The Light of Asia?. This movie was made by the German filmmaker Franz Osten.Its title suggests that the script was based on the book The Light of Asia composed by the British poet Sir Edwin Arnold. The film was a greater success in Europe than in India. Being born into a certain culture and religion brings a different set of challenges. Movies can create a window into a culture. In general, movies about Buddhism will either focus on historical events and people, or the applied teachings in an individual?s life. Both types are helpful in understanding Buddhist teachings and gives a frame of reference for understanding how the teachings were developed. ...read more.

The dish is traditionally enjoyed by Buddhist monks who are vegetarians, but it has also grown in popularity throughout the world as a common dish available as a vegetarian option in Chinese restaurants. The dish consists of various vegetables and other vegetarian ingredients (sometimes with the addition of seafood or eggs), which are cooked in soy sauce-based liquid with other seasonings until tender. The specific ingredients used vary greatly both inside and outside Asia. The goal of Buddhist education is to attain wisdom. One of the way to carry out Buddhist education is to teach Buddhism in schools and institutions so as to enrich the youth with Buddhist teachings. This is a good way to train the youth to be good person and purify their mind with moral merits. But it doesn?t mean that we will make Buddhism as the basis of the system of education, but to reinforce the existing education system. The prospect of teaching kids to pay attention is far more likely to spark educators' interest than suggesting, that meditation will connect them to a deeper understanding of experience.It's been said that Buddhism will establish itself in the west as a psychology rather than a religion, and that seems to be the case here - many of those introducing meditation to schools wouldn't identify as Buddhists. ...read more.

As with any religion, belonging can make an important psychological difference to people's lives. It provides informal support networks, as well as social opportunities. However, it is important to remember that Buddhism teaches that all things are characterised by the impermanence, suffering and not-Self. This means that while a sense of community and belonging has its benefits one should not become attached to it. The same is taught of the Buddhist religion as a whole. Cultural diversity is a reflection of people?s connection to their local environment, to the living world. Globalization is bringing every corner of the planet a cultural landscape dominated by fast food restaurants, Hollywood films, fashion. National Buddhist temples, scriptures were introduced from China and without much modification they were studied by the Japanese monks. Buddhist images and ornaments were made by the Japanese artisans, some of which can still be seen in the older temples in Japan. Buddhist temples in those days were the center of culture; they were not only used as places of worship, but also as schools, hospitals, dispensaries, orphanages, and refuges for older people. The monks were also school teachers, physicians, engineers, and developers of many construction projects. Therefore, the Japanese government encouraged and supported the Buddhist institutions and monks spiritually and materially, so that they could work with the government and the people more effectively ...read more.