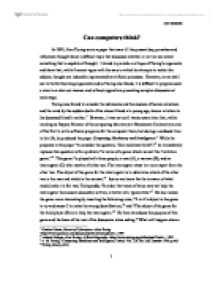 Can computers think? In 1950, Alan Turing wrote a paper that even till the present day, provokes and influences thought about a difficult topic that discusses whether or not we can create something that is capable of thought. I intend to provide a critique of Turing's arguments and show that, whilst I cannot agree with the way in which he attempts to tackle this subject, thought can indeed be represented by artificial processes. However, as we shall see in the forthcoming arguments and as Turing also found, it is difficult to progress such a view in a clear cut manner and without opposition presenting complex discussion at each stage. Turing was forced to consider the delicacies and the essence of human existence and the mind by the sudden death of his closest friend at a young age, shown in letters to his deceased friend's mother.1 However, it was not until twenty years later that, whilst working as Deputy Director of the computing laboratory at Manchester University as one of the first to write software programs for the computer there, but during a confused time in his life, he produced the paper Computing Machinery and Intelligence.2 Whilst he proposes in this paper "to consider the question, 'Can machines think?',"3 he immediately replaces this question with a problem "in terms of a game which we call the 'imitation game'."3 This game "is played with three people, a man (A), a woman (B), and an interrogator (C) ...read more.

In his analogy, the symbols Searle is provided with are called 'the questions,' the rule book is called 'the program' and the symbols he gives back after consulting 'the program' are called 'the responses to the questions.'8 He then asks us to "Suppose also that after a while I get so good at following the instructions for manipulating the Chinese symbols and the programmers get so good at writing the programs that from the external point of view [...] my answers to the questions are absolutely indistinguishable from those of native Chinese speakers."8 Searle's aim is to show that just because a machine could pass the Turing Test, it would not understand what it was saying in the same way as a human would, just as Searle doesn't understand his responses in the same way a Chinese speaker would. The specific refutations of this analogy and their replies are numerous and are not within the focus of this paper. What are of significant importance are the consequences of what it entails. If it is true that the artificial system following the rule book does not think, then there are two possibilities to explain the difference between human thought and the processes of a system such as in the Chinese Room. The first possibility is that humans possess something that the system does not. This entails that we are built in a different way to the system Searle is describing. This explanation would seem to require a definition of human thought and its constituents, which although is essential to such an argument, is not attempted in depth by Turing in his 1950 paper. ...read more.

effect they have on the world by causing our behaviour."11 In addition to this, functionalism also contains the view within the concept of Multiple Realizability that our mental states are not limited to our physical design, and that any other states of physical chemistry could realise similar functional roles.12 It is therefore also possible, that an artificially created state could realise functional roles that are similar to those created in us. If we were indeed to build the parts of a machine in a way that filled the same functional roles as the parts of a human brain, a machine would be created that was capable of thought in the same way humans are. We have therefore seen just how influential Turing's paper is and how it relates and stands up to current ideas. Whilst I have shown that the test that Turing presents us with is not a suitable one, his paper outlines the many issues facing the question of whether or not it is possible to build a machine that can think. However, I have shown that thought is not something we should necessarily become chauvinistic about and it seems we should be optimistic about future developments in this field. As Turing remarked over fifty years ago, "We can only see a short distance ahead, but we can see plenty there that needs to be done."13 There is still a lot to be done in terms of developing a structure of thought for a machine, but we are in a position where the road ahead is a lot clearer. ...read more.