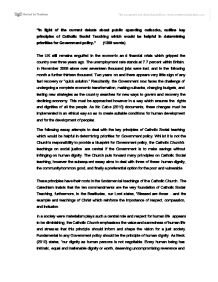 There is a danger however on placing too much emphasis on the importance of the individual that a form of extreme individualism within society may arise. Whilst individualism can be a great asset in society, Catholic Social teaching stresses the role of the individual within a community. Catholic Social teaching believes that it is our role to participate and contribute fully to society and in particularly to upholding the common good of those more vulnerable people in our society. In relation to priorities for Government policy, the Church states that protection of human life and dignity and a promotion of the common good should underpin any policy. This new age calls for a fresh structure; one which moves away from the New Labor's approach, to a more communitarian line. Without effective and verbal participation from citizens, articulating exactly what they want from the public and taking an active role in its delivery, services will be unresponsive to users' needs. In developing Government policies the Government must strive to work closely and alongside the communities in achieving and addressing their needs. In following this, David Cameron has launched his "big society" drive to empower communities. ...read more.

The Government's proposed welfare reforms are predicted to foresee 3.5 million disabled people lose over �9.2 billion of critical support by 2015 pushing them further onto the poverty line and closer to the fringes of society. Catholic Social teaching states that "any person with mental or physical disabilities, regardless of the cause or severity, must be treated as a unique person of incomparable worth, with the same opportunities and right to life as all other persons." Resultantly, there remains an urgent task for Government officials today, one of addressing the necessary cutbacks whilst accommodating to those most vulnerable in our society. To conclude, as Byron (sheet) states, "neither principles nor values lead anywhere if they remain abstract, embalmed in print, or are not internalized by human persons and carried in human hearts." In the current economic climate, were frustration and confusion are rife; these catholic teachings offer a criterion for ethical and moral action. These are not however mere documentations, but a challenge to the Government of today of addressing the current economic climate while in turn ensuring that the rights of all individuals are met. A new social contract needs to be produced, which addresses the needs of the vulnerable and poor, acknowledges and supports workers, and of which human dignity and common good are fundamental and recurring themes. ...read more.