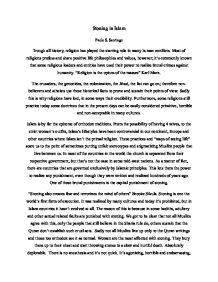 Cause and Effects of the Stoning in Islam. Islam is by far the epitome of orthodox traditions. From the possibility of having 4 wives, to the strict womens outfits, Islams lifestyles have been controversial in our continent,

Stoning in Islam Paola S. Santiago Trough all history, religion has played the starring role in many human conflicts. Most of religions profess and share positive life philosophies and values, however; it's commonly known that some religious leaders and entities have used their power to realize brutal crimes against humanity. "Religion is the opium of the masses" Karl Marx. The crusaders, the genocides, the colonization, the Jihad, the list can go on; therefore non-believers and atheists use these historical facts to prove and sustain their points of view. Sadly this is why religions have lost, in some ways their credibility. Furthermore, some religions still practice today some doctrines that in the present days can be easily considered primitive, horrible and non-acceptable in many cultures. Islam is by far the epitome of orthodox traditions. From the possibility of having 4 wives, to the strict women's outfits, Islam's lifestyles have been controversial in our continent, Europe and other countries where Islam isn't the primal religion. These practices and "ways of seeing life" scare us to the point of sometimes putting unfair stereotypes and stigmatizing Muslim people that live between us. ...read more.

Women are the most affected with stoning. They bury them up to their chest and start throwing stones to a slow and hurtful death. Absolutely deplorable. There is no anesthesia and it's not quick. It's agonizing, horrible and embarrassing, although shame it's not very preoccupying at that final moment I guess. I couldn't possible imagine getting buried myself and knowing the next moment I will start feeling lots of medium size stones (not too big because they would kill too fast and not too small cause they wouldn't do too much damage) all over my face, head, neck and chest. I think that's the point: empathy. Have the sensitivity to put yourself in the shoes of that people who face this situation. Maybe I would understand it a little if the crimes that end up in stoning were such like r****g, killing, abusing kids, but no, only crimes related to love affairs and illegitimate s****l relations. In 2008 nine people faced sentence to stoning in Iran. Iran is an Islamic Republic so these types of executions are common. ...read more.

Islam has great ways of living but its practices like stoning that damage their image. This is without a doubt a sensible topic, but stoning is inhuman, they have to learn at what point it breaks human rights and common sense. I have always been against any kind of capital punishment. That's because as a Christian I believe in divine justice. I also believe in equal rights and respect. We can't know for sure if the governments are still giving these punishments in courts or if villagers still practice it illegally, but from our position all we can do is aware and orientate people how these kind of things still happens in our world and how they are wrong. Discriminating against all Muslim is not going to help. To receive respect you got to give respect and Muslim people outside their countries receive all types of backlash. Finally I've come to realize that is precisely the only solution. If we want to live in peace with Muslim people we must learn to understand them in a way we can talk things more calmly. Stoning still is one of the most aberrant practices in the world we most extinguish along with others. The only way of doing this is with peace, kindness and persuasion. ...read more.