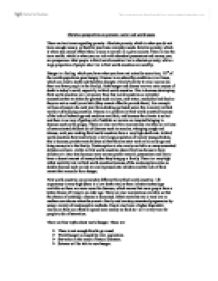 Christian perspectives on personal, social and world issues There are two terms regarding poverty- Absolute poverty, which is when you do not have enough money, or food for your basic everyday needs. Relative poverty, which is when you cannot afford what, is seen as normal in a given society. There is also the term wealth, which is when you are rich with abundant possessions and money, you are prosperous. Most people in third world countries live in absolute poverty, while a large proportion of people who live in first world countries are wealthy. Hunger is a feeling, which you have when you have not eaten for some time, 1/5th of the worlds population goes hungry. Disease is an unhealthy condition or an illness, which can lead to death and therefore disrupts a family's ability to raise income (as there are fewer people in the family). Both hunger and disease are two main causes of death in today's world, especially in third world countries. This is because developing third world countries are a lot poorer than first world countries so everyday necessities that are taken for granted such as clean, safe water, medicines and food as they are not so readily available (they cannot afford to provide them). For example millions of people die each year from drinking polluted water, this is mainly in third world or developing countries. Disease is a problem in third world countries because of the lack of technology and medicine available, and because the climate is so hot and there is no way of getting rid of rubbish so vermin are tempted bringing in diseases such as the plague. There are also very few vaccinations available so millions of unvaccinated children die of diseases such as measles, whooping cough and tetanus, each year making third world countries have a very high death rate. In third world countries they tend to have a very large population of mainly young children, this is because parents want children so that they can start work at an early age and bring money in to the family. ...read more.

Which is why Christians feel that they have to help the needy. The parable of the Good Samaritan is also important, this deals with the issue of who should be helped. It is about a man who is stripped of his clothes and beaten by robbers while he is on his way to Jerusalem. Both a Priest and a Levite (two well respected pillars of the Jewish religious community) walked on the other side of the road and passed by him. A Samaritan came (who were despised and hated) and took pity on him; he looked after him and took him to an Inn. This shows how one man suddenly put aside all his religious beliefs by going instantly to the aid of another man who was in pain and suffering. In Corinthians 8:13-15 it says: '...At the present time your plenty will supply what they need, so that in turn their plenty will supply what you need. Then there will be equality.' This means that you should treat others as you wish to be treated. So, when they are in need and you help them out, you may eventually be repaid by them returning the favor to help you out in times of need. This is another reason why Christians feel that it is important to help other people who are in need. In Amos 8:4-10 there are references to the way which people should treat each other it says: '...you who trample the needy and do away with the poor of the land... skimping the measure, boosting the price and cheating with dishonest measure..."I will never forget anything they have done...I will turn your religious feasts into mourning and all you singing into weeping.' This means that to people who try and rip other people off by charging too much or giving them too little etc will be punished and God will never forget what they have done. ...read more.

No one claimed that any of his possessions was his own, but they shared everything they had... There were no needy persons among them.' This shows that everyone should share so that everyone is treated equally and no one is different. The parable of the rich fool and God's commandments about harvesting the grapes and beating the olives from the trees proves that Christians should only take what they need and save the rest for other people. This is not always possible though so Christians find other ways of helping others out- by giving donations to programs such as Christian Aid. I think that Jesus concluded what happens to greedy people in Luke 12:16-21 by saying: 'This is how it is with those who pile up the riches for themselves but are not rich in God's sight.' As the 'rich man' had to '...give up' his life for being greedy and selfish and no Christians want to be like he was. In the 2 Corinthians 8.13-15 Paul commends the Corinthian Christians for their willingness to give money to help the Jerusalem Christians. This is today's equivalent of Christians giving money to other needy people in other countries, they believe that God will commend them for it when they die and go to Heaven. So, this is why Christians believe that 'they are responsible for each other- no matter where in the world they live.' Christians believe that people were created in reflection of God, therefore we were all created equally and good. So, people should treat the more unfortunate of us the same as they believe that it is what God wanted. Christians would not just help other Christians, they believe that as we were all created the same we all have the right to live the same kinds of lives instead of everyday being a battle to survive. They believe that they should not be greedy therefore people in richer countries should only take the amount of food they need and they should not waste any so there is enough to go around everyone. ...read more.