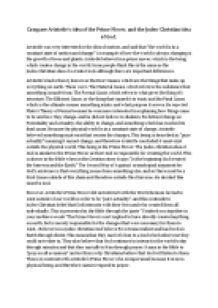 ﻿Compare Aristotle?s idea of the Prime Mover, and the Judeo-Christian idea of God. Aristotle was very interested in the idea of motion, and said that ?the world is in a constant state of motion and change? An example of how the world is always changing is the growth of trees and plants. Aristotle believed in a prime mover, which is the being which creates change in the world. Some people think this is the same as the Judeo-Christian idea of a creator God, although there are important differences. Aristotle?s had a theory known as the Four Causes, which are the things that make up everything on earth. These were: The Material Cause, which refers to the substance that something is made from; The Formal Cause, which refers to what gives the thing it?s structure; The Efficient Cause, or the thing that caused it to exist; and the Final Cause, which is the ultimate reason something exists, and what purpose it serves. He rejected Plato?s Theory of Forms because he was more interested in explaining how things came to be and how they change, and he did not believe in dualism. He defined change as Potentiality and Actuality; the ability to change, and something which has reached its final cause. Because the physical world is in a constant state of change, Aristotle believed something must exist that creates the changes. This being is described as ?pure actuality? meaning it cannot change, and therefore Aristotle concluded it must exist outside the physical world. This being is the Prime Mover. The Judeo-Christian idea of God is similar to the Prime Mover as their God is responsible for creating the world. This is shown in the Bible when in the Creation story it says ?In the beginning God created the heavens and the Earth.? The Second Way of Aquinas? cosmological argument for God?s existence is that everything comes from something else, and so there must be a First Cause outside of this chain and therefore outside this Universe. ...read more.

?The idea of a Judeo-Christian God is more convincing than Aristotle?s Prime Mover? Discuss Aristotle believed in an impersonal creator who is responsible for all change or ?motion? in the World. The Judeo-Christian concept of God is a much more personal one, who is in charge of what happens to us while alive and after death. Many people around the world believe in a Judeo-Christian idea of God, and therefore believe it is more convincing. The popularity of Jewish and Christian religions and how they have spread around the world could in themselves be evidence that God is convincing, because Aristotle?s Prime Mover has not founded western religion, and so it could be argued that if it was convincing, more people would believe in it. There are lots of accounts of religious experiences including God including miracles such as Lourdes or the stilling of the storm in the Bible, along with numinous experiences, and some people would say that this is evidence for the existence of God, and therefore that God is more convincing, however, the validity of these experiences is dubious, and there is no real empirical evidence. Empirical means that it can be verified with observation and proved scientifically. There are scientific explanations for modern miracles and we cannot trust someone?s account of what happened to them as this cannot be verified. Ayer?s verification principle showed that the language of religion was ?meaningless? because it could not be proved empirically. One argument for the Prime Mover is that belief in the Prime Mover is less problematic than belief in God, as this is harder to jistify. For example, if you believe in God you need to be able to justify how evil can exist in the world if God exists, otherwise known as the Problem of Evil. I can be very hard to maintain a belief in God when you are aware of all of the wrong in the world, as if God loves humans he would want to stop suffering, and he has the power to do so. ...read more.

However, there are lots of problems with taking morals from God, and this problem is known as the Euthyphro Dilemma. The Dilemma is that if you believe that things are moral because God says that they are, what if God orders someone to do something that is wrong, for example, God says murder is wrong, and then commands Abraham to kill his son. This is the problem of Abhorrent Commands. As well as this, if anything that God says is right, then as the philosopher Leibniz says ?Why praise him if he would be equally as praiseworthy in doing the exact opposite? This is the Arbitrariness Problem. However, if you then say that things are morally right or wrong dependent of God, then there are also problems, because then what is the point of believing in God? This is the Emptiness Problem. This means that it makes more sense to believe in a Prime Mover because he is not responsible for the way that humans behave. In conclusion, the arguments suggest that Aristotle?s Prime Mover is more convincing than the Judeo-Christian idea of God because a belief in God is difficult to justify and therefore is not convincing because there are too many problems with the idea of God. Although the issue of how the universe began will probably soon be completely resolved by science it makes more sense to fill the gaps of Science with the idea of a Prime Mover than God. This is because the idea of having to have an uncaused cause that started off the chain of causes logically makes sense, but it is not then necessary to conclude this is God. The philosopher David Hume made this same argument when criticising Aquinas. It could just be ?pure actuality? and a being completely separate from us who are not involved with the universe anymore. Although this idea is not comforting to some, it is better to seek out knowledge even if it makes us conclude there is no afterlife, than to live in ignorance just because it makes us happy. ...read more.