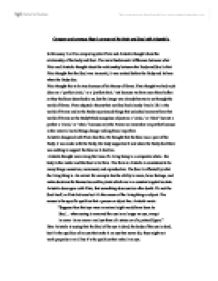 Compare and contrast Plato's concept of the Body and Soul with Aristotle's.

Compare and contrast Plato's concept of the Body and Soul with Aristotle's. In this essay I will be comparing what Plato and Aristotle thought about the relationship of the body and Soul. The main fundamental difference between what Plato and Aristotle thought about the relationship between the Body and Soul is that Plato thought that the Soul was immortal; it was existed before the Body and its here when the Body dies. Plato thought this to be true because of his theory of forms. Plato thought we had such ideas as a 'perfect circle,' or a 'perfect chair,' not because we have seen them before or they had been described to us, but the image was already known to us through the world of forms. Plato adopted a theory that our Soul had already lived a life in the world of Forms and as the Body experienced things this unlocked memory from that world of Forms so the Body/Mind recognises objects as a 'circle,' or 'chair' but not a perfect a 'circle,' or 'chair,' because only the Forms we remember are perfect because in the material world things change making them imperfect. ...read more.

Here Aristotle is saying that the Soul of the eye is dead, the body of the eye is dead, but it's the qualities of an eye that make it an eye that never die, they might not work properly or at all but it's the qualities that make it an eye. Plato did mention the concept of form in his writings, but in the past life of the Soul, Aristotle uses form to describe part of the Soul. Plato also mentioned form as part of the Soul too, "The Soul is divided into three different parts, roughly translated as reason, emotion and desire." But Plato became less sure about which parts of the Soul are immortal. Considering Plato taught Aristotle this indecision might have influenced Aristotle as a philosopher, there is certainly logic and similarity between this uncertain thought of a separate immortal Soul, and Aristotle's thought of form being immortal and the Soul not. Plato tells us that the human person has different elements: the physical body; the mind; and the immortal Soul. Aristotle totally disagrees with this, he wrote: "We can totally dismiss as wholly unnecessary the question whether the Body and Soul are one: it is meaningless as to ask whether the wax and the shape given to it are one." ...read more.

There are points of Aristotle's philosophy on the Body and Soul that seem true to me. "The particular nature of any Soul will depend on the living thing that it is." This line basically says that the living object has an effect on the Soul. For example if a human is unhappy, he/she will have an unhappy Soul. To me this seems a logical philosophy of the Soul, and how it can be affected by the living thing that it was part of. According with Plato's philosophy I believe that after the Body is dead and the soul is released, but I believe the Soul keeps the characteristics of the Body it belonged to and doesn't die with the Body. But I disagree with Plato and I don't think that the spirit goes to the realm of forms. Even though there two philosophers have many different ideas on the Soul's relationship with the Body, they do have many points of agreement. Plato taught Aristotle, and in many points it is clear to see how Plato influenced him in many ways, even in his indecision in the purpose of the soul. Aristotle gets himself confused when it comes down to the minor points of his Philosophy, but both philosophers had their downfalls and their triumphs. ...read more.