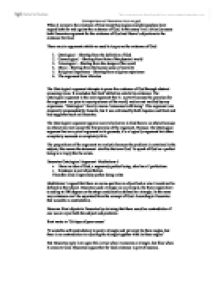 And also in the same way there is a group of people that built the house there could have been a group of Gods who designed the world. 2) Similar effects and similar causes While Hume emphasises the difference between a machine and world, he goes further by questioning whether it is a sound notion that similar effects result from similar causes. Wouldn't we have had to experience the origin of the world to know that an organised universe must have arrived from intelligence and thought? Couldn't similar effects be a result of different causes? For example a fire alarm can go off because the heat it detects from a fire, however the alarm could also go off because a mechanical fault. 3) Other analogies possible As already stated, Hume argued that the world resembles more an animal or vegetable than a machine or watch. Particularly he argued that the world could be compared with a carrot. If the analogy is made with a carrot then generation or vegetetion could cause the mark of design in the world. The natural world may possess some inner self-regulation and growth. One could say that Hume's argument is like an early form of Darwin's argument of evolution. Hume argues that intelligence is itself caused by the process of generation and the process of causes continues because intelligence requires a cause. Therefore wouldn't you end up with an infinite regression of causes. 4) God more human than Divine Hume claims that the more you push the analogy of the watch the more human you have to make God because of the ides of similar effects implying similar causes. For instance Infinity couldn't be attributed to any attributes of God. The cause ought only to be proportional to the effect and because the effect is not infinite we have no reason to ascribe infinity to God. Likewise perfection can't be ascribed. ...read more.

For example just because the Manchester factory siren sound and at the same time in London all the workers go home doesn't mean that manchester siren caused London workers to start packing up. Hume is not describing how to use the word cause so that it has meaning he is prescribing the way we should use it. Therefore the example would mean the Manchester siren was the cause of the London workers packing up and going home, and that doesn't make sense. We ought only say this if the conjunctions are genuinely constant because perphaps there is doubt. For example Manchester siren sounds and London workers remain at their posts because they have agreed to overtime. Sometimes one can have suspicions of this sort on basis of our general experience of types of constant conjunctions and therefore find Humes argument not strong enough to object to the cosmological argument. One could also critise Hume's objections aginst the argument from miracles * Hume identified habit as a description of how mind works but now he is using it prescriptively by stating that miracles should be based on appropriate application of habit principle. Jumping the Is- ought gap is typical of Hume's arguments.Hume should simply describe factors that cause people to believe in miracles not evaluate them. For example Hume talks of passion of surprise and wonder as being the cause of belief in miracle, but is there anything wrong with that? * Hume's definition of miracle make it logically impossible. He describes a miracle as something which violates law of nature, so if a miracle happened there would no longer be a law of nature. Therefore a miracle would no longer be a miracle because it no longer violate laws of nature. * Hume doesn't deal with the belief of a miracle based on direct personal experience but on bsais of testimony from others. In conclusion one could argue that both Descartes arguments for the existence of God and Hume's objection against the existence of God are weak and insufficient to prove their desired points. ...read more.