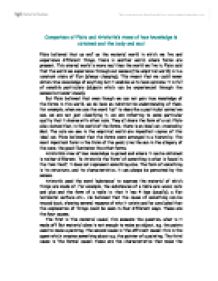 Comparison of Plato and Aristotle's views of how knowledge is obtained and the body and soul.

Comparison of Plato and Aristotle's views of how knowledge is obtained and the body and soul Plato believed that as well as the material world in which we live and experience different things, there is another world, where forms are present. This eternal world is more real than the world we live in. Plato said that the world we experience through our senses (the empirical world) is in a constant state of flux (always changing). This meant that we could never obtain true knowledge of anything but it enables us to have opinions; it is full of sensible particulars (objects which can be experienced through the senses but never known). But Plato believed that even though we can not gain true knowledge of the forms in this world, we do have an indistinctive understanding of them. For example, when we use the word 'cat' to describe a particular animal we see, we are not just classifying it, we are referring to some particular quality that it shares with other cats. They all share the form of a cat. Plato also claimed that, in the world of the forms, there is an ideal cat, created by God. ...read more.

He also believed that when an object has fulfilled its purpose, it has achieved goodness. Plato's understanding of the body and soul is related to his ideas about duality; he thought of the existence in two levels. He believed that the human person also has different elements: the physical body, the mind and the immortal soul. The physical body is in a constant state of change, and therefore could not be a reliable source of truth. The soul however is immortal and unchanging so it can both know and be known. The mind is able to form opinions but it is also able to achieve awareness of the eternal truths beyond the physical world, in the world of the forms. Plato believed that the mind wants to understand ideas, to gain real knowledge of the forms, but the body is interested in sense pleasures, and it has needs such as eating and sleeping which are constantly getting in the way of gaining true knowledge. So Plato saw the body as a nuisance and a blind, and believed that it wasn't the real person. The way that we speak of our bodies reflects this way of thinking. ...read more.

Souls are arranged in hierarchy e.g. a plant only has a vegetative type of soul. A human soul has a special addition to plant and animal souls; it has the power of reason. Through the working of the soul people develop their intellects and ethical characters. For Aristotle, the body and soul are not two separate elements, they are one thing. The soul is not separable from the body because it is what makes the body a person, rather than just material. Therefore it cannot exist without the body e.g. on a wax stamp used to seal letters, the imprint cannot exist without the wax. Aristotle made it clear that the soul dies along with the body but he made an exception to the rule, all of the soul is inseparable from the body, with the exception of reason. So as we can see, Plato and Aristotle's ideas were very different although they were great friends. Aristotle's ideas however prove to be more useful in the world today and explain a lot of things, whereas Plato's ideas may be seen as a bit far fetched and unrealistic. They are both wonderful people who have shaped the plan of learning for more than two thousand years, achieving so much it is hard to believe that it all came from two men. By Adileh Fard ...read more.