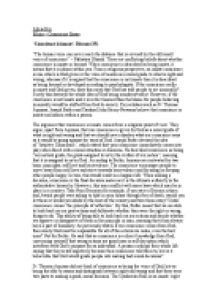 The main problem with religious beliefs is that, if conscience was is the voice of God then why do different religions and sections of Christianity believe different things about issues such as s*x and abortion? Surely, if conscience was the infallible voice of God then all religions of all cultures would have the same morals for all issues. However, as this is not the case there are differences between Christian denominations. This suggests that conscience is not as clear cut as Butler and Newman make it out to be. Another problem with the idea of having an innate conscience is that it assumes the existence of God. What about atheists and people that do not believe in God? Are we assuming that they have no conscience and they are the immoral people of the world? This poses a huge problem, as it infers that individuals that follow a religion and more superior than those who do not, as they do not have the innate moral guide to be able to distinguish right from wrong. However, atheists would tend to agree with the secular approaches to conscience. Christian?s are more in favour of accepting Aquinas? view of conscience as he does not say that it is the direct voice of God, but that it is reasoning that separates us from animals and helps us to make morally good decisions. ...read more.

Obviously, you could put it down to poor parenting but what about those people who have had a perfect childhood and have gained everything they wanted, yet still committed horrendous crimes? Another problem with the secular ideas of conscience is that it explains how it influences us into making decisions, but it does not tell us what the right path is? How are we supposed to know that the path we have chosen to take is the wrong one, or mistake the wrong path as being the right one? St. Thomas Aquinas would put this down to a mistake in reasoning, but how would psychologists such as Freud explain this? In conclusion, I believe with Piaget, in that conscience is something that you are conditioned with as a child, but then develop yourself when you become old and mature enough to make your own decisions about difficult situations. ?Things only looked wrong when there was someone to see you? ? Anna Godbersen. This implies that conscience is completely subjective and that as long as you do not have people telling you what to do and what is right or wrong like the Religious ideas of conscience tell you, then everything that you are doing seems like the right thing to do. ...read more.