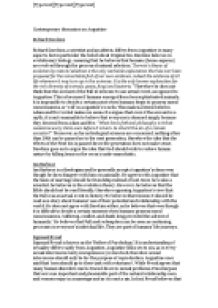 ﻿[Type text][Type text][Type text] Contemporary discussion on Augustine Richard Dawkins Richard Dawkins, a scientist and an atheist, differs from Augustine in many aspects, but in particular the belief about Original Sin. Dawkins believes in evolutionary biology, meaning that he believes that humans (h**o sapiens) are evolved through the process of natural selection. ?Darwin's theory of evolution by natural selection is the only workable explanation that has ever been proposed for the remarkable fact of our own existence, indeed the existence of all life wherever it may turn up in the universe. It is the only known explanation for the rich diversity of animals, pants, fungi and bacteria.? Therefore he does not think that the account of the Fall in Genesis 3 is an actual event, as opposed to Augustine. This is because if humans emerged from less sophisticated animals, it is impossible to decide a certain point when humans begin to possess moral consciousness, or ?will? in Augustine?s words. This makes a literal belief in Adam and Eve?s rebel makes no sense. He argues that even if the account is a myth, it is not reasonable to believe that everyone is doomed simply because they descend from Adam and Eve. ...read more.

?It is not God?s will merely that we should be happy, but that we should make ourselves happy.? Kant has quite an optimistic view on human nature, which is another way he differs from Augustine, who has a rather pessimistic view, believing that humans are weak-willed and are constantly doing what is wrong. Kant believes that humans have innate good will, which is what distinguishes us from animals. ?Sin? (not a term used by Kant) is therefore the lack of reason and the inability to live according to the good will. Kant continues to argue that if everyone can treat others as they would like to be treated (i.e. following the innate good will) then unpleasant events such as wars and conflicts would be very unlikely, especially when states, as a whole, behave morally and uses individual morality as a benchmark. ?Live your life as though your every act were to become universal law.? This, however, does not come naturally as humans have to overcome powerful desires and instincts such as greed. This is where education comes in as it helps to establish a higher level of civilized existence. His thoughts are in fact quite similar to Irenaeus?, who believes that we are made in the ?likeness of God? therefore we have to potential for moral perfection and in ...read more.

Gunton believes that the whole human personality has fallen short of perfection and the spirit is the aspect of our personality that desires redemption. Another example which Gunton believes that Augustine has misinterpreted the Bible is that Augustine believes that there will be an actual eschatological (end) moment when creation achieves perfection, whereas Gunton believes that it is really the time when we each achieve a state of wholeness. It is the moment when each of us finishes our own religious journey, ending in God?s redemptive love. Gunton also disagrees with Augustine?s view that women are more defective than men. He believes that Eve was created complementary to Adam, rather than superior or inferior to him. Gunton also believed in the God-given free will, as Augustine did; however, while Augustine believed that human has a natural tendency to do evil due to the presence of concupiscence, Gunton believes that the possibilities of humans doing good and the possibilities of humans doing evil are equally great. ?That the possibilities for its corruption and pollution are equally great follows from this, for it remains and indisputable principle of life that the very worst derives from the corruption of the very best.? ...read more.