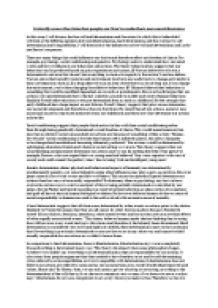 ﻿Critically assess the claim that people are ?free? to make their own moral decisions In this essay I will discuss the free will and determinism and the extent to which this is believable. I will look at the differing opinions between libertarianism, hard determinism and the contrast to soft determinism and compatibilism. I will then look at the influences on free will and determinism and Locke and Sartre?s responses. There are many things that could influence our choice and therefore affect our freedom of choice. For example, psychology, social conditioning and genetics. Psychology seeks to understand how our mind works and how it influences our behaviour and actions. The theory behaviourism suggests that our behaviour can be predicted based on prior experiences and causes. JB Watson believed we live in a deterministic universe that doesn?t leave anything to choice. In regards to the nature V nurture debate Watson states that heredity (nature) and environment (nurture) are useful tools to change and reinforce forms of behaviour. Such as, if a drug addict lives in an area where there is a lot of drug use, if you change the environment, you?re then changing the addictive behaviour. BF Skinner believed that behaviour is something that could be modified dependent on rewards or punishments. ...read more.

He however believes humans do have a sense of moral responsibility as humans are said to have all evolved with an innate sense of morality. A hard determinist suggests that all choices are determined by other events or actions prior to the choice. Similarly to Freud, this means that they are all causes by other choices made in the past. Honderich stated ?all our choices, decisions, intentions, other mental events and our actions are no more than effects of other equally necessitated events.? This theory believes humans make choices thinking they?re using free will however every event lead up to this choice and therefore it had already been determined. Hard determinism is considered very strict and rigid in its beliefs. Hard determinism comes to the conclusion that if everything is previously determined we are not free to act in any other way and cannot be held morally responsible for our actions as we didn?t choose them. In comparison to hard determinism, there is libertarianism. Libertarianism says we are completely free and nothing is determined in any way. This theory developed when some philosophers began to believe we couldn?t say everything was determined and accept no responsibility for our actions. It also stems from peoples argument that they needed to have freedom to act and be self-determining. ...read more.

They believe that freedom to act is doing what you want to do, without any interference and completely voluntarily. They also say our desires, values and prior choices are likely to pre determine how we act in certain situations. However the causes of our actions are so complex that they?re mostly random in their effects. This would suggest our actions are determined but all free because there is no external coercion involved. John Locke believed that free will was an illusion. He said the defining part of voluntary behaviour was that you could pause and reflect before you made a choice therefore deciding what the consequences of the action would be. For example, if a man wakes up in a locked room and chooses to remain there, not knowing he is locked in. The man believes he has made the choice to stay there, however in reality he had no choice. Meaning it was determined. Sartre said ?A choice is said to be free if it is such that it could have been other than what it is? Believed that with absolute freedom becomes absolute responsibility, so if you wanted complete freedom the consequence is 100% moral responsibility. One idea was ?man is not free not to be free? It did no matter what you chose, as moral responsibility dealt with that, but rather that you were free to choose at all. ...read more.