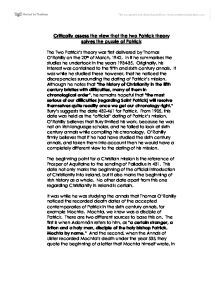 Critically assess the view that the two Patrick theory solves the puzzle of Patrick The Two Patrick's theory was first delivered by Thomas O'Rahilly on the 20th of March, 1942. In it he summarises the studies he undertook in the years 1934-35. Originally, his interest was contained to the fifth and sixth century annals. It was while he studied these however, that he noticed the discrepancies surrounding the dating of Patrick's mission. Although he notes that "the history of Christianity in the fifth century bristles with difficulties, many of them in chronological order", he remains hopeful that "the most serious of our difficulties [regarding Saint Patrick] will resolve themselves quite readily once we get our chronology right." Bury's suggests the date 432-461 for Patrick. From 1905, this date was held as the "official" dating of Patrick's mission. O'Rahilly believes that Bury limited his work, because he was not an Irish language scholar, and he failed to look at sixth century annals while compiling his chronology. O'Rahilly firmly believes that if he had have studied the sixth century annals, and taken them into account then he would have a completely different view to the dating of his mission. ...read more.

Another idea that was mentioned was that the significant dates in some saints lives was moved, so that they correspond with other important figures, however baring in mind the amount of dates that are wrong, by up to seventy years, this is hugely unlikely. It is clear that the 492/3 date would "fit" other contemporaries, however in accepting this, we must question the date cited for the arrival of Patrick. Bury is convinced that this date is "certain, and rested upon clear and unvarying tradition." Bury rejects the 492/3 date, and is of the opinion that it was changed in an attempt to equate the lifetime of Patrick to that of Moses. O'Rahilly however argues that the 492/3 date is just as likely as the 461 death date, and he believes that rather the arrival date should come into question. Since the seventh century, and coming in to the ninth century, there has been a tradition of two missionaries called Patricius, who both worked in Ireland in the fifth century. O'Rahilly points out that there are notes in the appendix of T�rech�n's "Brief Account", in the "Book of Armagh", which speaks of: "Palladius also called Patricius." ...read more.

For example, Carney, who believes that Palladius laboured in Scotland, rather than Ireland, disputes O'Rahilly's identification of Palladius with the "elder Patrick". It has also been criticised because it is very much based on assumptions. O'Rahilly assumed that Palladius had worked in Ireland for thirty years, with little to no evidence. This is criticised because if Palladius did minister for thirty years, perhaps Patrick would have mentioned him in his writings? Murphy points out however, that Patrick failed to mention those who assisted him in his own mission with the Irish, never mind those who predecessed him. Ryan also puts forward a very credible argument. Palladius is widely associated with Auxilius and Iserninus. So if he had been a minister for thirty years, should they not have been the ones to become his success him, rather than an unknown Briton. Hanson is very critical of O'Rahilly's chronology, saying that its major weakness is that "it discounts internal evidence about him in favour of later tradition...it is not supported by any evidence in Patrick's writings...and rests on hypothesis." It is impossible to say that the Two Patrick theory solves the puzzle of Patrick, when there is so much conflict an debate regarding it, and so little scholars agree. ...read more.