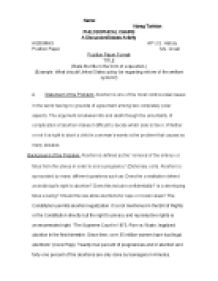 ﻿Name: Nareg Tarinian PHILOSOPHICAL CHAIRS A Discussion/Debate Activity AGBUMHS AP U.S. History Position Paper Ms. Croall Position Paper Format TITLE (State the title in the form of a question.) (Example: What should United States policy be regarding reform of the welfare system?) A. Statement of the Problem: Abortion is one of the most controversial issues in the world having no grounds of agreement among two completely polar aspects. The argument is between life and death though the uncertainty of complication of abortion makes it difficult to decide which side to favor. Whether or not it is right to abort a child in a woman?s womb is the problem that causes so many debates. Background of the Problem: Abortion is defined as the ?removal of the embryo or fetus from the uterus in order to end a pregnancy? (Dictionary.com). Abortion is surrounded by many different questions such as: Does the constitution defend an individual?s right to abortion? ...read more.

The Pro-Choice group to abortion believes that women have the freedom to choose to abort the fetus in their womb or keep it. This group of people believes that abortion is a personal choice and the freedom of choice is protected for all individuals. The biggest concern for them is that if abortion is made illegal, it will end up posing more problems such as the increase in ?back alley? abortions, or self abortions or worse, the mother may end up killing the baby after giving it birth which has happened a numerous amount of times with young mothers. They believe that the fetus is just a ?mass of tissue? instead of a human being and that it is the right of the mother and father of the ?mass of tissue? to keep it or abort it. Pro-Choice advocates believe that personhood begins later when the child has been given birth. ...read more.

There could be a chance that the fetus is alive and abortion could be that person murdering the baby inside their womb. Because abortion is legalized, whether or not the fetus manages to live to be born now depends on people and whether the unborn are protected by the right to live. Just because abortion is legal does not mean it is okay. Slavery was legal over 150 years ago but that did not mean it was right. Abortion for rape is another controversial topic. Babies born of this act are not intended since the sexual act is forced and no precaution or contraception can be taken. Much of the population says that killing the babies from these actions is all right but is it? This argument is between the pro-choice and pro-life. Pro-life is a group that goes against abortion. These people claim that human life begins at conception therefore making the fetus a person. They believe that the unborn deserve the right to live. Even in the case of rape, they believe that the child should not be punished for a criminal?s wrong doings. E. ...read more.