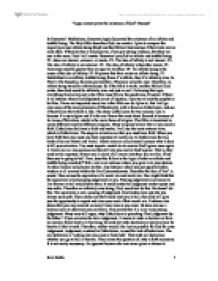 Descartes logically proved the existence of an infinite and truthful being - Discuss.

In Descartes' Meditations, Descartes logically proved the existence of an infinite and truthful being. The Holy Bible describes God, our creator. I plan to compare the logically proven infinite being (God) and the Biblical God and see if their traits mirror each other. If they do then it would prove, if not give strong evidence, that they are one in the same. First I will restate Descartes' proof of an infinite and truthful being. P1- Ideas are internal, external, or innate. P2- The idea of infinity is not internal. P3- The idea of infinity is not external. P4- The idea of infinity is therefore innate. P5- Any cause must be greater than or equal to its effect. P6- An infinite being is the cause of the idea of infinity. P1-P6 proves that their exists an infinite being. P7- Established is an infinite, truthful being. Since it's infinite, then it's infinitely wise. In Plato's The Republic, Socrates proved that a Wiseman would be Just. Therefore, an infinite being would be infinitely just. So if the Bible is truth, and the Biblical God exists, then God would be infinitely wise and just as well. Following this logic, everything God carries out in the Bible must follow the guidelines of Justice. If there is an instance where God displayed an act of injustice, it proves at least the prophet to be false. ...read more.

Evidence also shows that you may commit as many Venial sins as you want. He does not use a balance scale to determine you salvation. This proves that it is in no way passing judgement. Many may still argue, why Catholicism is preaching 'final judgement by the father'. If you examine the term Judgement, it means to make a decision or form an opinion. Since God is all knowing, he need not make decisions or opinion since he knows all that is truth. Therefore, neither would it be Just or possible for God for pass Judgement. Judgement, as stated in Catholicism, is used for lack of better term. The real definition is 'looking into your soul to find truth.' That truth will determine whether you go to h**l or heaven. Then comes the question of, why is faith necessary. It is not nearly necessary. An ignorant human who was never given a chance to choose faith is not excluded from heaven. The ones without faith who are excluded are the ones who consciously chose not to put their faith in God, but rather to put their faith in something else or nothing at all. That all follows what is Just, therefore Salvation as Catholics translate the Bible follows. Another belief is that of Purgatory. Purgatory happens when you have no mortal sins, but your soul must be cleaned of Venial sin before you may face God in heaven. ...read more.

It would be a fallacy of logic to conform simply because of a majority. In conclusion, I have not found any flaws in logic within the bible's description of God. All his traits and processes of salvation mirror that of what an infinite and truthful being would be and use. Along with this, I was able to, accidentally, accomplish two other things. One was create or identify a method for disproving any divine scripture. Simply put, if a prophet makes a description of God, but that description does not follow logically into what an infinite and truthful being is, then the description is wrong. Therefore, anything else that prophet has written may fall into question and he may be defined a false prophet. I have found none such case and a proof that I will never find such a case has not been presented to me. The second thing that was accidentally accomplished was a strong argument leading toward the overall truthfulness of Catholicism. The Catholic Ideals follow logically what are God, and the son of God. It didn't change with any popular idea of a time. Any change in ideal that did occur was deemed unjust and changed back. It also didn't sprout out of a where simply because one did not agree with an ideal. What I have presented was a strong argument that should give Catholicism a logical edge over others, and make it a logician's religion. ?? ?? ?? ?? "Logic cannot prove the existence of God" Discuss? 1 Ravi Bathia ...read more.