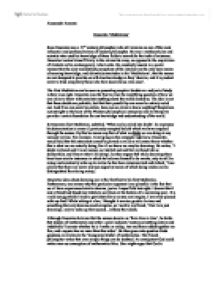 Descartes 'Meditations' Rene Descartes was a 17th century philosopher who still remains as one of the most influential and profound writers of modern philosophy. He was a mathematician and scientist who used his knowledge of these fields to search for the truth of existence. Descartes locates himself firmly in the rationalist camp, as opposed to the empiricism of Aristotle or his contemporary, John Locke. He constantly asserts in a poetic manner that the clear and distinct perceptions of the intellect are the only sure means of securing knowledge, and ultimately concludes in his 'Meditations', that the senses are not designed to provide us with true knowledge as they 'deceive, and it is prudent never to trust completely those who have deceived us even once'. The First Meditation can be seen as presenting sceptical doubts as a subject of study in their own right. Descartes was the first to raise the mystifying question of how we can claim to know with certainty anything about the world around us. ...read more.

I dreamt that I and a friend had found two tickets to see Oasis at the bottom of a swimming pool. It is a sold out gig which I tried to get tickets for so as you can imagine, I was very pleased with my find! Whilst sitting at a bar, I thought it was too good to be true and something that only dreams could comprise, so I said to my friend, 'I bet I am just dreaming', only to wake up that second...without the tickets. Although Descartes believes that the senses deceive us 'from time to time', he holds that studies of mathematics and other a priori subjects 'contain something certain and indubitable' because whether he is 'awake or asleep, two and three added together are five, and a square has no more than four sides'. He then goes onto question Gods goodness in relation to the 'transparent truths' of mathematics. The French philosopher writes that even simple things can be doubted. ...read more.

Furthermore, this 'imaginary freedom while asleep' conveys our content with accepting and sticking with 'old opinions' for fear that we may have to accept a newer, harsher reality. Whereas Descartes on the other hand wished to start from the foundations of what we think we know, and build up new solid beliefs about true knowledge. He wanted to 'recognize something certain', and if that was not possible, than 'recognize for certain that there is no certainty'. In Conclusion, Descartes saw his Meditations as providing the metaphysical underpinning of his new physics. Like Galileo, he sought to overturn two-thousand-year-old prejudices injected into the Western tradition by Aristotle and form a more modern and highly sceptic question of knowledge and existence. However he fully maintained that we do exist as 'I am thinking therefore I exist', so for Descartes, since he is the author of all his thoughts and queries into the world, he must be 'at least, something?' ?? ?? ?? ?? Alessandra Anzante ...read more.