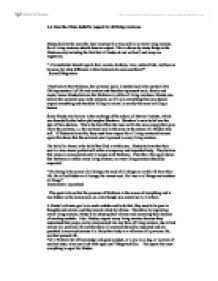 Describe Hindu belief in respect for all living creatures.

A.i. Describe Hindu belief in respect for all living creatures. Hindus believe the soul (the inner most spirit or true self) is in every living creature. So all living creatures should deserve respect. This is shown by many things in the Hindu society including the fact that all hindus do not eat beef, and many are vegetarian. " A householder should regard, deer, camels, donkeys, mice, snakes birds, and bees as his sons, for what difference is there between his sons and them?" Srimad Bhagvatam They believe that Brahman, the universal spirit, is symbolised in the symbol OM. OM represents all of life and creation and therefore represents male, female and neuter, hence Hindus believe that Brahman is within all living creatures. ...read more.

Therefore, by respecting every living creature, Hindu's are obeying their ahimsa and increasing their chances of reaching moksha. Also, Hindus, respect every living creature because they understand that people can be reincarnated into any form of living creature, due to bad actions in a previous life and therefore all creatures should be respected and not punished in any way because it is likely their body is a reflection of a previous life, not their present life. "Or a Brahmin full of knowledge and good conduct, or a cow on a dog, or a person of unclean caste, wise men look with equal eye" Bhagavad-Gita. This quote also says everything is equal for Hindus ...read more.