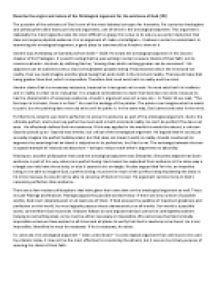 Describe the origins and nature of the Ontological argument for the existence of God.

Transfer-Encoding: chunked ﻿Describe the origins and nature of the Ontological argument for the existence of God. [35] The question of the existence of God is one of the most debated concepts for humanity. For centuries theologians and philosophers alike have put forward arguments, one of which is the ontological argument. This argument is debatably the most logical but also the most difficult to grasp; this is due to its nature as a priori deduction that does not require physical evidence. It is an argument of credo ut intelligam ? I believe in order to understand. In examining the ontological argument, a good place to start would be Anselm?s view on it. Anselm was Archbishop of Canterbury from 1033 ? 1109. He wrote the ontological argument in the second chapter of his Proslogion. It is worth noting that he was writing in order to assure theists of their faith, not to convince atheists. ...read more.

The painter can imagine what he wants to paint, but the painting does not truly exist until he paints it. In the same way, God cannot only exist in the mind. Furthermore, Anselm uses God?s perfection to prove his existence as part of the ontological argument. God is the ultimate perfect, and to be truly perfect he must exist in both mind and reality. He can?t be perfect if he does not exist. He effectively defines God into existence. If this was applied in the world this would be absurd, a criticism Gaunilo picked up on. Gaunilo was a theist, but critical of the ontological argument. He argued that he could just as easily imagine the perfect holiday island, but that does not mean it exists in reality. Anselm countered his argument by asserting that an island is subjective in its perfection, but God is not. ...read more.

These include Platinga and Malcom. Platinga argued the possible worlds theory: if there are any number of possible worlds, God must rationally exist on at least one of them. If God possess the qualities of maximum greatness and perfection on this world, he must logically possess these characteristics on all worlds. Our world is a possible world, so therefore God must exist. Malcom follows on and argues that God cannot be contingently existent (relying on something else), so he must be either necessary or impossible. We cannot say that God is totally impossible unless we have existed in all times and all places to verify that God is nowhere to be found. He is not impossible, therefore he must be necessary. If he is necessary, he exists. To conclude, the ontological argument ? when understood ? is a very logical argument that continues to be used by scholars today. It may not be the most effective for convincing the atheist, but it serves its primary purpose of assuring the theist of their faith. ...read more.