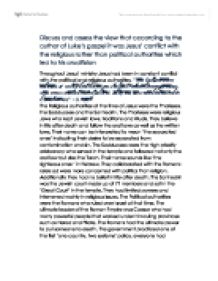 Discuss and assess the view that according to the author of Luke's gospel it was Jesus' conflict with the religious rather than political authorities which led to his crucifixion Throughout Jesus' ministry Jesus had been in constant conflict with the political and religious authorities. " The Gospel show that Jesus' words and actions created unrest amongst those who encountered him, particularly the Jewish and Roman authorities" ~ S. Tyler The Religious authorities at the time of Jesus were the Pharisees, the Sadducees and the Sanhedrin. The Pharisees were religious Jews who kept Jewish laws, traditions and rituals. They believe in life after death and follow the oral laws as well as the written laws. Their name can be interpreted to mean 'the separated ones' indicating their desire to be separated from contamination and sin. The Sadducees were the high-priestly aristocracy who served in the temple and followed not only the oral law but also the Torah. Their name sounds like 'the righteous ones ' in Hebrew. They collaborated with the Romans rulers ad were more concerned with politics than religion. Additionally they had no belief in life after death. The Sanhedrin was the Jewish court made up of 71 members and sat in the 'Great Court' in the temple. ...read more.

which ultimately caused the religious authorities to wonder who Jesus thought he was since he put himself equal to God by forgiving sins which only God could do. On one Sabbath Jesus allowed his disciples to harvest corn which led to some Pharisees questioning why he allowed them to do what is unlawful on a Sabbath. Jesus replied by comparing himself to King David who allowed his soldiers to eat the consecrated bread in the temple which was only lawful for priests to eat. Then he claimed that "the Son of Man is Lord of the Sabbath" (Luke 6:5) Both of these terms imply divinity , Son of Man means the one whom all people will bow and worship (Daniel 7) and the Lord of the Sabbath means the one who created the Sabbath and its laws , God. The Pharisees took what Jesus did very seriously and challenged him on what they believed was breaking the 3rd commandment in Exodus. At the time of Jesus, sinners and people will illnesses were shunned Jesus however reversed the norm in society and reached out for these people. Others thought that associating with sinners and sick people would make them impure yet Jesus attempting to change this thought associated with them. ...read more.