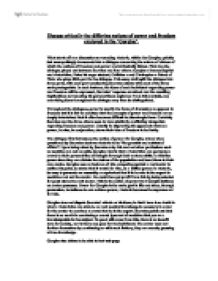 Discuss critically the differing notions of power and freedom explored in the 'Gorgias'.

Discuss critically the differing notions of power and freedom explored in the 'Gorgias'. What starts off as a discussion surrounding rhetoric, within the Gorgias, quickly but unsurprisingly transcends into a dialogue concerning the nature of virtuex of which the notions of freedom and power are intrinsically linked. Plato has the dialogue played out between Socrates and four others. Gorgias a famous Sophist and rhetorician, Polus his eager student, Callicles x and Chairephon a friend of Plato who plays little part in the dialogue. This essay shall split the dialogue into three parts, with each part considering Socrates debate with each of the three main protagonists. In each instance, the ideas of each individual regarding power and freedom will be expressed, Socrates' response examined and the resulting implications surrounding his personal ideas explored. From this analysis, any overriding ideas throughout the dialogue may then be distinguished. Throughout the dialogues, power is usually the focus of discussion as opposed to freedom but it is fair to conclude that the concepts of power and freedom are so deeply intertwined that it often becomes difficult to disentangle them. Certainly Socrates and the three others seem to have similarly conflicting viewpoints regarding freedom and power. ...read more.

To complete the paradox, the philosopher claims that politicians especially are likely to be led away by others in order to gain approval rather than pursuing there own personal good which would be beneficial for them. The conclusion is that those who apparently have the most power turn out to infact have the very least. More potential chat on Polus Socrates brings up the issue of freedom by insisting on a distinction between doing as one sees fit and doing what one wants i.e negative and positve freedom. Polus has showed that the orator can do as he sees fit, but that doesn't automatically mean that he can do what he wants. Socrates argues, and Polus agrees, that some things are good, some things are bad, and some things are in themselves indifferent but can be either good or bad depending on how they're used. What we want are the good things, but sometimes we must do the indifferent things (some of which may be very disagreeable, like taking medicine or going on a sea voyage) in order to get the good things. ...read more.

This position is best expressed by Polus (466-69) and Callicles (490-492). Plato takes great care to debunk this formulation. On the one hand, Socrates argues, those who rule others often must perform actions they do not will in order to benefit the state of which they are in charge. In this sense then, apparently powerful tyrants are often unable to act as they will, and true power is shown to consist of something other than ruling over others. At the same time, those who repeatedly satisfy their desires do not possess real power because this gratification further fuels rather than extinguishes the appetites. A person capable of always satisfying desire is in constant need of more satisfaction, and as such possesses no true power. This point is illustrated in 493b by the metaphor of the leaky jar. Mention of probable proximity of Socrates execution to book and themes this may have inspired. Socrates views freedom for the most part, whether there is anything within that has any element of control. This would include not having any addictions or other strong needs. Ideally reducing ones needs until one is content with what is to hand is best. Kalon v agathon try and include ...read more.