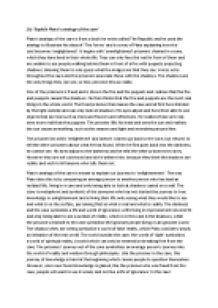 Discuss Plato's analogy of the cave

﻿2b) ?Explain Plato?s analogy of the cave? Plato?s analogy of the cave is from a book he wrote called The Republic and he used the analogy to illustrate his ideas of ?The Forms? and is a way of Plato explaining how the soul becomes ?englightened?. It begins with ?unenlightened? prisoners chained in a cave, which they have lived in their whole life. They can only face the wall in front of them and are unable to see people walking behind them in front of a fire with puppets projecting shadows, allowing them to only guess what the images are that they see. Voices echo throughout the cave and the prisoners associate these with the shadows. The shadows are the only things they can see, so they perceive this as reality. One of the prisoners is freed and is shown the fire and the puppets and realises that the fire and puppets caused the shadows. He then thinks that the fire and puppets are the most real things in the whole world. ...read more.

The shadows they are seeing symbolize a world of false reality, which Plato considers simply an imitation of the real world. The world outside the cave, the world of ?light? symbolizes a world of spiritual reality, a world which can only be entered be breaking free from the cave. The prisoners? journey out of the cave symbolizes an average person?s journey into the world of reality and wisdom through philosophy. Like the prisoner in the cave, this journey of knowledge is hard at the beginning which causes people to question themselves. However, once new found knowledge is gained, like the prisoner who was freed from the cave, people will want to use it wisely and not live a life of ignorance ?in the cave?. The sun represents truth and knowledge and the ?form of good? and is the origin and source of all other forms; without the sun there would be no light. Being temporarily blinded by the light from the sun symbolises enlightenment, because it allows the prisoner to see what is causing the shadows and allows them to discover a world that is ?real?. ...read more.

If this idea is applied to humans it would mean that all of our supposedly perfect actions that we carry out such, as perfect relationships are not actually perfect. People such as philosophers and scientists who have come out of the cave don?t always have the right or genuinely want to believe what they have seen. It may actually cause people anxiety or discomfort to experience a new world. Also, some people only get a partial view of reality, so only having only a slight understanding could lead to people having an even more distorted view on reality than they had originally. To an extent everyone is ?in the cave?. When applying the analogy to everyday life, no one will actually see absolute reality. Everyone sees forms. Understanding actual ?reality? and what lies outside the cave is a difficult process if people do not have the mental skill to understand it (and many people don?t), but not everyone who gets slightly out of the cave believes it and lots of people probably find it easier to not believe. ...read more.