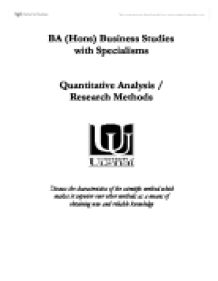 Discuss the characteristics of the scientific method which makes it superior over other methods as a means of obtaining new and reliable knowledge.

BA (Hons) Business Studies with Specialisms Quantitative Analysis / Research Methods Discuss the characteristics of the scientific method which makes it superior over other methods as a means of obtaining new and reliable knowledge Introduction Marketing research has borrowed liberally from other disciplines; this is not surprising because research methodologies and techniques have application over many fields of study. Like other emerging disciplines, marketing research theory has been developed by creative adaptation rather than blind adoption. The extent to which marketing theory has been built on borrowed concepts was noted some years ago by the Marketing Science Institute of America. Historically, most sciences started by borrowing their conceptual approach and general theoretical ideas from other sciences. Joyce1 has observed that: Market research is not a practice or study isolated from other practices or studies. It has drawn freely from certain expert academic fields and will no doubt continue to do so. Further, market research organisations make use of people with expert, specialist training - especially from those fields known broadly as 'the social sciences ' - both as staff members and consultants. It took a long while to determine how is the world better investigated. One way is to talk about it. For example: Aristotle, the Greek philosopher, stated that males and females have different number of teeth, without bothering to check; he then provided long arguments as to why this is the way things ought to be. This method is unreliable: to determine whether a statement is correct it requires evidence. ...read more.

When exploring a new set or phenomena scientists do use existing theories, however, it is always kept in mind that the old theories might fail to explain the new experiments and observations. In this case new hypotheses are devised and tested until a new theory emerges. A theory is accepted not based on the prestige or convincing powers of the proponent, but on the results obtained through observations and experiments which anyone can reproduce. Most experiments and observations are repeated many times. If the original claims are not verified the process returns to the origin of such discrepancies. Epistemology is the branch of philosophy that studies knowledge. It attempts to answer the basic question: what distinguishes true (adequate) knowledge from false (inadequate) knowledge? Practically, this question translates into issues if scientific methodology: how can one develop theories or models that are better than competing theories? It is possible to construct a useful and reliable model for understanding scientific reasoning, known as the "Hypothetico-Deductive" model. The heart of the "Hypothetico-Deductive" model is deductive reasoning (induction plays a role primarily in generating laws about observations that are then deduced from theory, such as the law of multiple proportions). According to the H-D model, hypotheses and theories are sets of general principles that are said to explain and predict observable results. A theory is successful insofar as observable consequences can be deduced from those general principles and statements. When a positive instance of a predicted observation occurs, it is said to confirm that theory. Deductive and Inductive Thinking In logic, two broad methods of reasoning are referred to: the deductive and inductive approaches. ...read more.

A priori knowledge is any kind of knowledge that is in no way derived from sense experience, observation or experiment. What might be called the classical empiricist view is associated especially with Locke, the first of the so-called British Empiricists, and his successors Berkeley and Hume. Empiricism has its roots in the idea that all we can know about the world is what the world cares to tell us; we must observe it neutrally and dispassionately, and any attempt on our part to mould or interfere with the process of receiving this information can only lead to distortion and arbitrary imaging. Conclusion The scientific method is intricately associated with science, the process of human inquiry that pervades the modern era on many levels. While the method appears simple and logical in description, there is perhaps no more complex question than that of knowing how we come to know things. In comparison with the non-scientific sources the emphasis here is that the scientific method distinguishes science from other forms of explanation because of its requirements of systematic experimentation. We use specific methods because they are objective, public and can give repeatable results. The question of how science is so successful at improving understanding is hardly every presented as a question at all. No matter what happens, you will learn something. Science is not only about getting 'the answer'. Scientists who study extremely complex problems can spend a lifetime and not find 'the answer'. Even so, their results may eventually play a part in completing the full picture of understanding. Animal and children may learn about whatever they pay attention to, and so do scientists. ...read more.