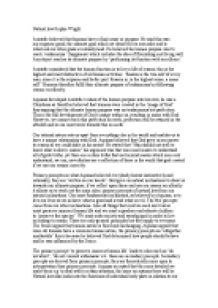 Discuss the concept of Natural Law with reference to the ideas of Aristotle and Aquinas.

﻿Natural law-Sophie Wright. Aristotle believed that humans have a final cause or purpose. He said this was our supreme good; the ultimate goal which we desire for its own sake and to which all our other goals eventually lead. He believed the human purpose was to reach ?eudaimonia? (happiness) which includes the idea of flourishing and living well. Any object reaches its ultimate purpose by ?performing its function with excellence?. Aristotle considered that the human function is to live a life of reason; this is the highest and most distinctive of all human activities. ?Reason is the true self of every man, since it is the supreme and better part. Reason is, in the highest sense, a mans self.? Humans therefore fulfil their ultimate purpose of eudaimonia by following reason excellently. Aquinas developed Aristotle?s ideas of the human purpose into his own; he was a Christians so therefore believed that humans were created in the ?image of God? thus arguing that the ultimate human purpose was not eudaimonia but perfection. This is the full development of God?s image within us, resulting in union with God. However, we cannot reach this perfection on earth, perfection will be attained in the afterlife and so we must work towards this on earth. Our rational nature sets us apart from everything else in the world and enables us to have a unique relationship with God. ...read more.

Following reason excellently requires us to align our actions and intentions with the purpose for which god created us. As humans never intentionally choose evil (as this goes against our rational nature), Aquinas argued that sin was an error of reason. If someone focuses on ?lesser goods? like wealth or power they lose sight of the ?highest good? (God). In this way reason is enslaved by irrational desires, so we lose sight of our true purpose. We must, therefore, use reason correctly. For this to happen we must set our hearts on God and seek his good will. We must check and supplement natural law with Gods divine law revealed in the bible. St Paul refers to the law that ?God inscribed on the hearts of men? obeying it is thus the equivalent to obeying God?s commands, Aquinas thought that this supports the concept of natural law. Aquinas believed that Gods Eternal Law never changes, it determines the way things such as animals and planets behave and how humans should behave. All things participate in eternal law by the natural tendencies by which they are moved to their ends. Rational beings also participate in eternal law by their knowledge of positive and negative moral precepts, conformity to which leads us towards the end built into us by nature. ...read more.

Yet, Aquinas allowed killing in war as the lesser of two evils, to preserve life. So why not allow killing a foetus to save the mother? And why must we never lie, even if it could save a life? It is unjust to never look into the consequences, what if murdering one person meant the safety of a whole community. The ban on h********l acts also reveals inconsistencies. If these are wrong because they prevent reproduction, Aquinas should not support the celibacy of priests. This ban can be seen as discriminatory and unjust, being based upon Aquinas? preconceived ideas of sexuality. Also science undermines the belief in God creating us as we are, humans evolved by the blind process of natural selection. With no designer, we have no ultimate purpose that we must fulfil. Our natural inclinations are brute facts, not built in guidance as to how we should behave. Although there are some ways in which natural law can lead to just decisions, overall it is unjust because we cannot judge something properly upon just someone actions and intentions as the consequences of these could be completely different to what was intended. The weaknesses in natural law outweigh the strengths because the basis of natural law is god, people no longer believe in God as strongly as they used to so multiple weaknesses have come from that. ...read more.