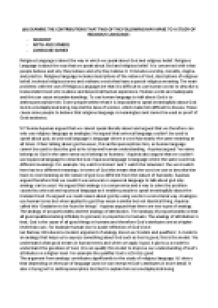 Discuss the study of Religious Language

Transfer-Encoding: chunked ﻿(bi) EXAMINE THE CONTRIBUTIONS THAT TWO OF THE FOLLOWING MAY MAKE TO A STUDY OF RELIGIOUS LANGUAGE: * ANALOGY * MYTH AND SYMBOL * LANGUAGE GAMES Religious Language is about the way in which we speak about God and religious belief. Religious Language is about the way that we speak about God and religious belief. It is concerned with what people believe and why they believe and why they believe it. It includes worship, morality, dogma and practice. Religious language includes descriptions of the nature of God, descriptions of religious belief, technical religious terms and ordinary words that have a special religious meaning. The main problems with the use of Religious Language are that it is difficult to use human words to describe a transcendent God who is above and beyond all human experience. Human words are inadequate and this can cause misunderstandings. To use human language to talk about God is to anthropomorphize him. Some people believe that it is impossible to speak meaningfully about God. God is a metaphysical being, beyond the laws of science, which make him difficult to discuss. These cause some people to believe that religious language is meaningless and cannot be used as proof of Gods existence. St Thomas Aquinas argued that we cannot speak literally about and argued that we therefore can only use religious language as analogies. ...read more.