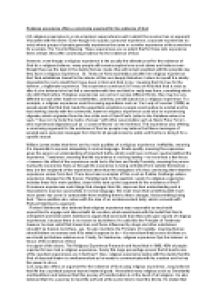 Does Religious Experience offer a convincing argument for God

His psychological explanations come into major conflict with the strengths of the argument that religious experience offers a convincing argument for the existence of God. He also suggested the idea of a repressed sexuality and seeking a father figure relating to religious experience, saying that it is all psychologically related and are not actual encounters with the divine. Finally, even though religious experiences may prove to be good for the receiver, changing their life forever, it doesn?t necessarily prove that God exists. Even though there are strengths which are mentioned above and the fact that it has apparently happened to atheists, there are also weaknesses that sceptics and others will always useagainst the statement that religious experience offers a convincing argument for the existence of God. Many people may argue against the idea of corporate experiences too. Even though the validity of a claim may be increased by the number of people who said it happened, sceptics may argue that the crowd effect could be in place ? people may get carried away with one another causing them all to apparently experience the same thing, however in reality it is actually their influences making them see what apparently everyone else is seeing, supported by Lash?s quote ?...in action and in discourse, we learn to see God?. It also depends on interpretation, people view different actions and events in different ways. Whilst a religious believer may learn to see God in everything that happens, a non-religious believer may dismiss this ?religious experiences? as just an experience in general. ...read more.