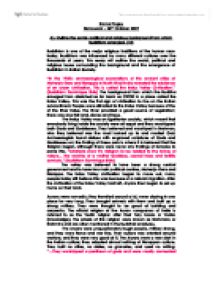 Emergence Of The Buddha

Emma Tingey Homework - 26th October 2007 A). Outline the social, political and religious background from which Buddhism emerged. (10) Buddhism is one of the major religious traditions of the human race today. Buddhism was influenced by many different cultures over the thousands of years. This essay will outline the social, political and religious issues surrounding the background and the emergence of Buddhism in Indian Society. "In the 1920's archaeological excavations of the ancient cities of Mohenjo-Daro and Harappa in North West India revealed the existence of an urban civilisation. This is called the Indus Valley Civilisation." (Buddhism Dominique Side) The background from which the Buddha emerged from stretched as far back as C2700 in a place called the Indus Valley. This was the first sign of civilisation to live on the Indian subcontinent. People were attracted to the Indus Valley because of the of the River Indus. The River provided a good source of vegetation; there was also flat land, stones and trees. The Indus Valley was an Egalitarian society, which meant that everybody living inside the society were all equal and they worshipped both Gods and Goddesses. They believed and worshiped in Brahman, who they believed was the most looked up to and modest God. Archaeologists found statues with engraved scriptures of Gods and Goddesses on; the finding of these pots is where it is believed that the Religion began, although there were never any findings of temples to prove this. ...read more.

Women now did not have any power; men now did everything, women were now considered inferior to men. As a belief in the caste system, you were only allowed to marry within your level of the caste system. The political organisation was hierarchical and centralised. Kingdoms varied in size and kings were no more than village leaders. Some people believe that Hinduism began with the Indo-Aryans, while others believe that it began with the Indus population. Hinduism has no founder and no single moment of beginning. The emergence of Buddhism was now falling into place. Hinduism is the largest religion of India. The religion is based on prayers and believes in many gods and goddesses. However, one God named Brahman was more significant than the others. There were special priests known as Brahmin who were used to help you worship this special God, they helped to channel people's faith. Asceticism defined as the practice of self-disciple, voluntary undertaken, in order to achieve a higher or spiritual ideal began. People didn't agree with Brahman priests, they wanted to live a simple life in the forest. Hinduism also believes in reincarnation, this is rebirth - the cycle of life. It consists of Birth, Life, Death and Rebirth; you undergo the cycle over and over again. It is thought that if you live a good life you will be born into a better caste in your next life. You will achieve good karma if you do your duty well which is determined by the caste you are born into. ...read more.

When you have tried it out it could make you a better person or takes you nearer to your spiritual goal. Siddhartha Gautama did turn his back on the previous teachings are the Caste system; the Caste system was a very important part of the social and religious life within India and Hinduism. When Prince Siddhartha went to find enlightenment he forgot all about the ideas of the caste system even though he was born into a good Varna. The Buddha's invitation was to come and see for yourself, join him in his meditation to reach Nirvana. The Buddha wanted to get out of the cycle of; life, death and rebirth and be enlightened to discover a new life. He didn't completely want to get rid of rebirth; he wanted to incorporate it into Buddhism. He believed in renunciation, which is what the ascetics believed in. They renounced with the Buddha to the forest. They gave up there existence. The Buddha did not want to pray to Brahman anymore, he wanted to break away from the priestly religion and become personal. Men and women both did this. Personal is being spiritual instead of Religious. The Buddha also incorporated Karma into Buddhism because it's still the action needed for rebirth. He couldn't change that. He did turn his back on the caste system though as it was seen as a social class factor and not needed for the religion, as everyone was equal for him. The economic developments destabilised the Brahminical order. Prince Siddhartha still believed in the ideas of rebirth and the cycle of life, but came up with a way of escaping the circle. ...read more.