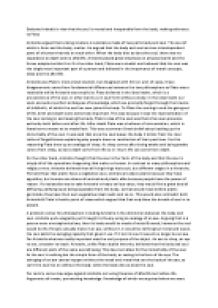 Evaluate Aristotles view that the soul is mortal and inseparable from the body, making reference to Plato.

Transfer-Encoding: chunked ﻿Evaluate Aristotle?s view that the soul is mortal and inseparable from the body, making reference to Plato Aristotle argued that a living creature is substance made of two parts body and soul. The soul of which is form and the body, matter. He argued that the body and soul are two interdependent parts of a human that rely on each other. When the body dies as does the soul, there was no separation at death and no afterlife. Aristotle placed great emphasis on physical world and the forces adopted within this. On the other hand, Plato was a dualist and believed that the soul was the single most important part of a person and believed in the importance of moral concepts, ideas and the afterlife. Aristotle was Plato?s most prized student, but disagreed with him on a lot of cases, these disagreements came from fundamental differences between the two philosophers as Plato was a rationalist whilst Aristotle was empiricist. Plato believed in the ideal realm, which is a pre-existence of the soul, in other words us in soul form without a body. ...read more.

This would also contradict both Aristotle & Plato?s theistic point of views which argued that God only blew the breath of soul in to people. A problem comes for philosophers including Aristotle in the distinction between the body and soul. Aristotle quite elegantly put through his theory using an analogy of an axe. Arguing that is a person were a metaphorical axe, then its body would be made of metal & wood, however the soul would be the thing to actually make it an axe, without it, it would be nothing but metal and wood, the soul adds the swinging capacity that gives it use. If it lost its soul it would no longer be an axe. For Aristotle what was really important was the end purpose of the object. An axe to chop, an eye to see, a teacher to teach. Aristotle, unlike Plato dualist theories, believed that the body and soul are different parts of the same overall being. This does not allow for the immortality of the soul. ...read more.

As Plato argues that opposite forms may not exist in the same object. For example an axe cannot be both sharp and blunt. As the soul derives life through association with the form of life it cannot admit death. This association leads to an immortal soul trapped in a constant cycle of being embodied then escaping at death to return to the ideal realm, and then reborn into another human body. In conclusion I disagree with Aristotle?s view that the soul is mortal and inseparable from the body, although I credit him for his strong arguments and analogy of the axe. The main reason for my support of Plato does not come from Plato himself, but from a rationalist standpoint. My key concern with Aristotle?s work on this matter is that it doesn?t fully combat the idea of innate knowledge of which is key. Chomsky?s linguistic arguments have also been backed up by experiments with animals of which are smarter than a three year old child yet have not been able to learn a basic form of language. Proving to me that there is some form of pre-existing soul possibly from the soul having lived before or from the ideal realm. ...read more.