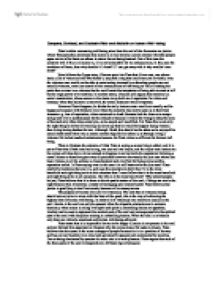 Evaluate plato and aristotle on well being

Compare, Contrast, and Evaluate Plato and Aristotle on human Well-being. Plato's ethics concerning well-being arise from the end of the discussion on justice where Thrasymachus articulates that justice is in fact merely a social contract whereby people agree not to inflict harm on others in return for not being harmed. Out of this rises the question well if this is all justice is, if it is only desirable for its consequences, In this case the avoidance of harm, then why shouldn't I cheat? If I can get away with it why wouldn't one cheat? Now follows the Gyges story, Glaucon puts it to Plato that if two men, one whom leads a life of virtue and one who doesn't, acquired a ring that could turn you invisible, even the virtuous man would not be able to resist acting immorally so therefore people are not actually virtuous, more just scared of the consequences of not being so. This is making the point that no man is so virtuous that he could resist the temptation of being able to steal at will by the ring's power of invisibility. In modern terms, Glaucon still argues that morality is a social construction, whose source is the desire to up hold one's reputation for virtue and honesty; when that sanction is removed, the moral character would evaporate. However Plato disagrees, he thinks the truly virtuous man would act morally and be happy and at peace with himself, even when the outcome may not be seen as in their best interests e.g. ...read more.

Upon gathering this information you are now and only after consulting the form, in a position to obtain an objectively correct answer. Does this mean that those whom don't have access to the forms of the virtues cannot be virtuous and in turn not achieve well-being? So in summary one must have the soul in the correct balance; this is the necessary and sufficient clause for well being and why is this the case because of the tri-partite nature of the soul. Aristotle's ethics are very similar to that of Plato's, sharing distinct similarities but also some differences. For Aristotle human-well being can also be translated as Eudemonia (flourishing). In book one Aristotle states that "that every art, every investigation and similarly every action and pursuit is aimed at some good" and that happiness is an activity of the soul according to virtue. As an early virtue theorist Aristotle believes a person should be judged on their character and not their actions. According to Aristotle virtue is something learned through constant practice beginning at a young age. To further understand this we should fully translate 'ar�te'-this is the word translated into 'virtue' in most English translations however the word more generally translates into excellence, so for example a musician will exhibit 'ar�te' in performing without any moral connotations. It logically follows that excellence in music cannot be reached simply by reading about it, it requires systematic practice and practical implementation. For Aristotle there is not necessarily an essential distinction between being virtuous and exercising a learned skill like playing an instrument, he believes that virtue is also a learned excellence (the highest learned excellence). ...read more.

Aristotle agrees with Plato that the good for anything that has a function relies on the implementing of that function. So it follows that Aristotle tries to work out if human beings have a function ("the function argument"). "Then do the carpenter and the leatherworker have their functions and actions, while a human being has none, and is by nature idle, without any function? Or, just as eye, hand, foot and, in general, every part apparently has its functions, may we likewise ascribe to a human being some function besides all theirs? (Nicomachean Ethics Book I Chapter 7 29-33)". So assuming that there is a function specific to humans Aristotle discounts sense perceptions because they are not only human traits. He concludes that the human function is to exhibit reason. The function of the excellent man to equal the function of any man the only difference is that the excellent man exhibits his function well. So For Aristotle, the human good seems to be synonymous with human well being. Thus, in order for a human being to be happy, he or she must live a life that successfully expresses reason. Here we see that both agree that to achieve well being, humans must fulfil their function but do they disagree on what that function is? Plato believing that it is living a just life and Aristotle that it is excellent reasoning, I think not, isn't being virtuous having reason ruling over the soul, surely this is the same as exhibiting excellent reason. ...read more.