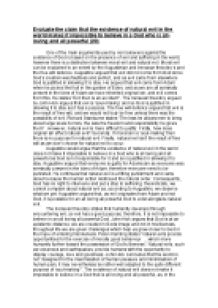 ﻿Evaluate the claim that the existence of natural evil in the world makes it impossible to believe in a God who is all-loving and all powerful (20) One of the main arguments used by non believers against the existence of God is based on the presence of evil and suffering in the world; however there is a distinction between moral evil and natural evil. Moral evil can be explained to an extent by the Augustinian and Irenaean theodicy?s and the free will defence. Augustine argued that evil did not come from God since God?s creation was faultless and perfect, and as evil came from elsewhere God is justified in allowing it to stay. He argued that evil came from Adam when he picked the fruit in the garden of Eden, and as we are all seminally present in the loins of Adam we have inherited original sin, and evil comes from this. He states ?Evil then is an accident?. The Irenaean theodicy argued by John Hick argues that evil is ?soul-making? and so God is justified in allowing it to stay as it has a purpose. ...read more.

Peter manning states ?natural evils provide opportunities for the exercise of morally good behaviour ?which move humanity further toward the possession of God?s likeness?. Natural evils, such as volcanoes and earthquakes, provide humans with the opportunity to display courage, love and goodness. John Hick concludes that the world is not ?designed for the maximisation of human pleasure and minimisation of human pain, it may nevertheless be rather well adapted to the quite different purpose of ?soul-making??. The existence of natural evil does not make it impossible to believe in a God that is all loving and all powerful, as, in the words of Irenaeus, ?How, if we had no knowledge of the contrary, could we have instruction in that which is good? . Lastly, Peter Vardy would claim that the existence of natural evil does not make it impossible to believe in an all loving, all powerful God as what we perceive as natural ?evil? is actually the world doing what it is supposed to. According to Genesis, ?And God saw everything that he had made, and behold, it was very good?. Therefore, a massive tidal wave like the Tsunami was just being a ?good? tidal wave, as it is supposed to; a massive earthquake is just being a ?good? earthquake. ...read more.

Rowe states ?there exist instances of intense suffering which an omnipotent, omniscient being could have prevented?an omniscient, wholly good being would prevent the occurrence of any intense suffering it could?therefore there does not exist an omnipotent, omniscient, wholly good being?. Depending on your faith and beliefs, the existence of natural evil may make it impossible for you to believe in an all loving all powerful God. However, process thought explains that God is not omnipotent, but that he is all good. Process thought argues that God persuaded the world into a state of greater order from matter, and as God is not the creator of natural laws including natural evil, then God is limited within these laws and is not omnipotent. However, God can exist alongside evil, as God suffers as well. A. N. Whitehead describes him as ?the fellow sufferer who understands?. When natural evils occur, His creative desires are frustrated. It is impossible for an all loving all powerful God to exist alongside natural evil, however for a God who simply is not powerful enough to intervene, he can exist alongside natural evil. To conclude, whether you believe natural evil makes it impossible to believe in an all loving all powerful God depends on your faith, beliefs and whether you believe God is all loving and all powerful. ...read more.