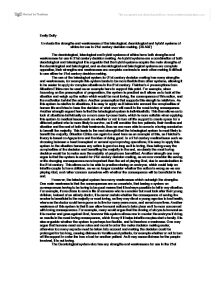 Evaluate the strengths and weaknesses of the teleological, deontological and hybrid systems of ethics for use in 21st century decision making.

Another weakness of this system is that it can allow immoral actions to take place as it is more concerned with loving consequences. For example, many would argue that the cloning of ebryos is immoral as it is murder and goes against God, however this system allows one to murder the embryos if doing so results in the most loving consequence, which it may if it helps infertile couples start a family. It is also arguable whether the system is perhaps too flexible, and is therefore a weakness. One may argue that humans need some rules and moral in order the make decision making easier, otherwise too many aspects must be taken into account and making the decision could be prolonged for too long, causing distress for families and patients, for example whether or not to turn off life support in order the free a bed for another patient. As it may cause distress for the people involved, it is not loving. The Deontological system also has any strengths and weaknesses for use in the 21st century decision making, mainly evolving around the fact that this system is far less flexible and has rules and morals to follow. ...read more.

This could create huge tension between doctors and patients, as some patients from particular religious backgrounds may refuse treatment which goes against their religion, and thus making the process of being cured even more difficult as the doctor would not personally find a way to negotiate with the patient as the system is not individualistic, and could end in the patient not being cured. This also stems to the next weakness, that this system does not consider consequences at all, and bases its decisions on the action being morally right. However, an action could be morally right but the consequence can be seen as unloving, for example not turning off life support, as one may see it as murder so it is morally right to keep the patient on life support, however if life support was turned off the money saved could benefit the majority and save more lives. However, this system would not consider this outcome, and would only be concerned with whether the action is morally right, therefore the act can be good but with a morally wrong consequence. The Hybrid system acquires mainly many strengths, and one major weakness. As the hybrid theory combines both teleological and deontological strengths, its is arguable that using this system in a 21st century decision allows us the best of both systems. ...read more.