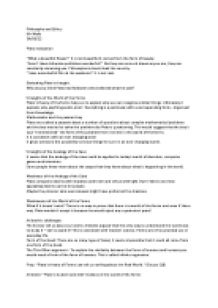 Evaluating Platos thought. Why do you think Plato had followers who believed what he said?

﻿Philosophy and Ethics Mr Walls 24/09/12 Plato evaluation ?What a beautiful flower!? It is not beautiful it comes from the form of beauty. ?Aren?t those Athenian politicians wonderful?? No they are as much slaves as you are, they are constantly deceiving you. Philosophers should lead the country. ?I saw a wonderful film at the weekend.? It is not real. Evaluating Plato?s thought. Why do you think Plato had followers who believed what he said? Strengths of the World of the Forms Plato?s theory of the forms helps us to explain why we can recognise similar things. Ultimately it explains why anything exists at all ? Everything is a particular with a corresponding form - Argument from Knowledge. Mathematics and the peasant boy Plato once asked a peasant about a number of questions about complex mathematical problems and the boy was led to solve the problems by Plato?s questioning. This would suggest that the boy?s soul ?remembered? the form of the problem from its time in the world of the forms. ...read more.

Aristotle ? Plato?s student and didn?t believe in the world of the forms Aristotle?s World View The world was constantly in a state of change This change could be descried in terms of motion. E.g. moving from a seed to a flower He was a keen astronomer and noticed that even the planets were always in motion. His was very important for his later understanding of God. Unlike his teacher Aristotle didn?t think that the World could be explained by a priori knowledge and the world of the forms. Rather, he thought that much knowledge was based on careful observation (a posteriori knowledge) His idea of good is when something fulfils its purpose. In order to understand things you have to know what they are made of. Substance: This is a thing?s essence; what it is e.g. a table is a substance Accidents: Particular properties of a substance e.g. a table could be made out of wood and metal. ...read more.

Aristotle also said that there were 4 causes of Why things change according to Aristotle Aristotle?s four causes explain why things exist. But Aristotle noticed that things don?t stay the same forever. He also needed to explain why things change. To do this he explained that two terms were necessary: Potentiality and Actuality. Actuality Every substance we observe has actuality. This means that it exists in an actual state. Think of an acorn. It is a substance and it exists in an actual state that can be described using the four causes. Potentiality However things also have potentiality. This is the potential for them to be something better. Potentiality is actualised, i.e. happens when a thing fulfils its purpose. So an actual acorn also has the potential to be an oak tree. This is its purpose. So why do things change? The world is always changing because the things in it are moving from potentiality to actuality. This change must be explained. Therefore there has to be a Prime Mover, something that cannot change itself, this is his idea of God. Volcano, explain it as Aristotle. ...read more.