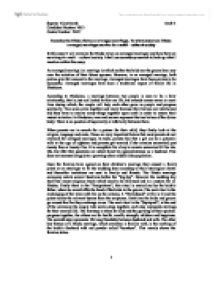 Examine the Hindu views on arranged marriages. To what extent can Hindu arranged marriages survive in a multi - cultural society In this essay I will examine the Hindu views on arranged marriages and how they are surviving in s multi - cultural society. I shall use secondary research to back up what I mention within this essay. An arranged marriage is a marriage in which neither the bride nor the groom has a say over the selection of their future spouses. However, in an arranged marriage, both parties give full consent to the marriage. Arranged marriages have been proven to be successful. Arranged marriages have been a traditional aspect of family life in Hinduism. According to Hinduism, a marriage between two people is seen to be a holy relationship, that is just not limited to this one life, but extends across seven or more lives during which, the couple will help each other grow as people and progress spiritually. Two souls come together and marry because their karmas are intertwined and they have to resolve many things together upon earth in order to ensure their mutual salvation. In Hinduism, man and woman represent the two halves of the divine body. There is no question of superiority or inferiority between them. When parents are in search for a partner for their child, they firstly look at the religion, language and caste. ...read more.

In contrast, Eastern cultures that practice arranged marriages place far more emphasis on the practical, such as integrity, diligence, ambition, modesty, and kindness. People get married based on practical reasons, and work on building affection later. Strong characteristics like the ones described above are very favourable to building love and affection in Eastern marriages. As a result, these marriages are much longer-lasting than many Western marriages. It is because the primary emphasis is not on love, s*x, and physical beauty that arranged marriages are usually so successful, because the spouses get to know one another on a practical level first, looking beyond trivial issues such as beauty. I know it can go both ways, there are many arranged marriages that are just total h**l, and there are marriages that started out based only on infatuation and grew stronger as time passed. But I think as long as one looks for the right characteristics in a potential spouse, then, arranged marriage can definitely work. People within the western civilisation are mistaken by the term arranged marriages. Arranged doesn't necessarily mean "fixed". Arranged marriages it encompasses a lot of different varieties: the harshest arranged marriages are almost forced upon the bride or groom while the most liberal ones start with just an introduction of the couple through their parents and the rest is up to the couple. ...read more.

Traditionally it is the girl's parents that bear the cost of the wedding and to jumpstart their daughter's married life they shower her with gifts and ornaments to take to her in-laws. Unfortunately, this has aggravated people's greed end in the many evils of dowry system. In the end, the discussion of arranged and love marriages comes down to which is better? Obviously, the one that leads to more successful marriages. Supporters of arranged marriages claim that it is more successful, but their definition of success focuses on divorce rates. But are divorce rates really a measure of a successful marriage? Do all the couples that don't get divorced stay happy with each other? The occurrence of divorce in society depends on a lot of factors including the stigma of divorce. It should be a matter of great concern that we have begun to ignore the ancient and lofty ideals of Hindu marriage and are anxious to follow in the footsteps of cultures that do not value these ideals. No wonder, the number of divorce suits filed by Hindu couples is on the rise. Instead of strengthening the traditional ideals, which for thousands of years have helped us prevent marriage and family break-ups, we are misdirecting our energies towards promoting the ideal of sense-enjoyment and self-interest. In my opinion it is still not too late to be proactive to protect the sanctity of Hindu marriage. 1: http://www.religioustolerance.org/chr_dira.htm 2: http://www.youthinformation.com/infopage.asp?snID=805 3: http://lair.xent.com/pipermail/fork/2003-March/018427. ...read more.