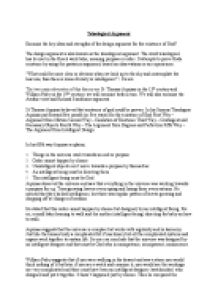 ﻿Teleological Argument Examine the key ideas and strengths of the design argument for the existence of God? The design argument is also known as the teleological argument. The word teleological has its root in the Greek word telos, meaning purpose or order .It attempts to prove Gods existence by using the posteriori argument, based on observations or an experiences. ?What could be more clear or obvious when we look up to the sky and contemplate the heavens, than there is some divinity or intelligence??- Cicero The two main advocates of this theory are St. Thomas Aquinas in the 13th century and William Paley in the 19th century; we will examine both in turn. We will also examine the Aesthic view and Richard Swinburne argument. St.Thomas Aquinas believed that existence of god could be proven. In his Summa Theologiae Aquinas put forward five proofs (or five ways) for the existence of God:First Way ? Argument from Motion Second Way ? Causation of Existence Third Way ? Contingent and Necessary Objects Fourth Way ? The Argument from Degrees and Perfection Fifth Way ? The Argument from Intelligent Design. ...read more.

The universe is so complex but intricate in design for example the distance of the sun from the Earth no to close or not to far just perfect to sustain life. Paley suggests that the universe itself is proof of an intelligent designer and could have not come by accident. He also suggests that everything had been designed to fulfill a purpose for example a Human Eye. And designed to order or regularity e.g. Newton?s Law. ?These phenomena are clearly too big for science to explain. Postulating to a God merely explains things that science has yet to explain. Richard Swinburne Richard Swinburne suggests that the probability that the world was created by chance is there but very low and remarks that the very existence of it and the human opportunities to do good, the pattern of history the evidence of miracles and religious experience. Only omnipotent, omnibenevolent God is able to produce a world orderly in these respects. Atheistic argument suggests the world is beautiful, the water and the mountains, the animals for example all the beautiful colours of the peacock it is beauty that goes beyond that which is necessary to live. ...read more.

Design can never be an ultimate explanation for anything. It can only be a proximate explanation. A plane or a car is explained by a designer but that's because the designer himself, the engineer, is explained by natural selection. Richard Dawkins In Conclusion there are lot of challenges against the Teleological arguments for example Hume and the carmaker, Mill and the poor designer. Darwin and Dawkins on natural selection. To challenge these I would argue who made the carmaker, the poor design (evil and good) is part of Gods creation to bring balance to the world and so evolution is part of his creation. We cannot be here by chance, there are more than 10 billion nerve cells in your brain. Each one sprouts between 10,00 and 100,00 fibers to contact other nerve cells, creating over one trillion connections that is the same as a forest covering 1 million square miles, with 10,000 tree per square mile and on each of these trees there are over 100,000 leaves That?s how many connections you have in your brain. Did this happen by chance? My conclusion is that God is the designer of the universe. ...read more.