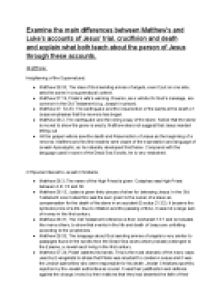 Examine the main differences between Matthews and Lukes accounts of Jesus trial, crucifixion and death and explain what both teach about the person of Jesus through these accounts

﻿Examine the main differences between Matthew?s and Luke?s accounts of Jesus? trial, crucifixion and death and explain what both teach about the person of Jesus through these accounts. Matthew: Heightening of the Supernatural; 1. Matthew 26:53, The idea of God sending armies of angels, even if put on one side, sets the scene in a supernatural context. 2. Matthew 27:19, Pilate?s wife?s warning. Dreams, as a vehicle for God?s message, are common in the Old Testament (e.g. Joseph in prison). 3. Matthew 27: 52-53, The earthquake and the resurrection of the saints at the death of Jesus emphasise that the new era has begun. 4. Matthew 28:2, The earthquake and the rolling away of the stone. Notice that the stone is moved to show the grave is empty. Matthew does not suggest that Jesus needed letting out. ...read more.

3. Matthew 26:31, The Old Testament reference is from Zechariah 13:7 and is included, like many others, to show that events in the life and death of Jesus are unfolding according to the prophecies. 4. Matthew 26:53, The language about God sending armies of angels is very similar to passages found in the scrolls from the Dead Sea caves which probably belonged to the Essene, a Jewish sect living in the first century. 5. Matthew 27:24, Pilate washes his hands. This is the most dramatic of the many ways used by Evangelists to stress that Pilate was reluctant to condemn Jesus and it was the Jewish authorities who were responsible for his death. Jewish Christians saw this rejection by the Jewish authorities as crucial. It was their justification and defence against the charge, levied by their relatives that they had deserted the faith of their fathers. ...read more.

This story is found only in Matthew. It is highly defensive and included to refute a belief commonly held among Jews. It certainly suggests that the accusation that the disciples had stolen the body of Jesus was around when the Gospel was written. 8. Matthew 28:1, as a guard has been set, the women can only come to look at the grave. Matthew has followed Mark?s account closely, just altering and adding a little to aid the readers of his Church to understand the person and message of Jesus. From the changes he made, redaction scholars deduce that he has a Jewish-Christian picture of Jesus and Jewish interests. In this gospel, Jesus is the suffering Messiah. It had not been expected that the Messiah would suffer, so Matthew is careful to show that what happened is a fulfilment of the prophecies. He is also concerned to show the Church as a separate entity to traditional Judaism, and as the bearer and interpreter of the story of salvation. ...read more.