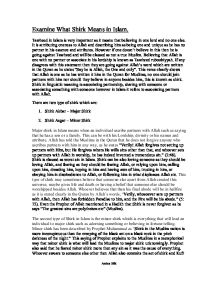 Examine What Shirk Means in Islam

Examine What Shirk Means in Islam. Tawheed in Islam is very important as it means that believing in one lord and no one else. It is attributing oneness to Allah and describing him as being one and unique as he has no partner in his essence and attributes. However if one doesn't believe in this then he is going against Tawheed and will be classed as not a true Muslim. Believing that Allah is one with no partner or associate in his lordship is known as Tawheed ruboobiyyah. If any disagrees with this statement then they are going against Allah's word which are written in the Quran as he states "Say he is Allah, the One and only". This verse clearly shows that Allah is one as he has written it him in the Quran for Muslims, no one should join partners with him nor should they believe in anyone besides him, this is known as shirk. Shirk in linguistic meaning is associating partnership, sharing with someone or associating something with someone however in Islam it refers to associating partners with Allah. There are two type of shirk which are: 1. Shirk Akbar - Major Shirk 2. Shirk Asgar - Minor Shirk Major shirk in Islam means when an individual ascribe partners with Allah such as saying that he has a son or a family. ...read more.

Minor shirk can also take the form of actions such as believing in fortune telling and wearing amulets. We as Muslims know this because Prophet said whoever goes towards fortune-teller and believes in his story, his prays will not be accepted for forty days. Tawheed is very important in Islam because it is the pillar which Islam is built upon, as it is the first thing invited to and preached to for thirteen years. "say, none has the right to be worshipped..." when an individual believes in Tawheed they have to believe in the three aspects of tawheed which are Ruboobiyah- in his lordship, Uloohiyyah- in his worship and finally Asma was sifaat believing in his Names and Attributes. Tawheed is a condition for an action to be accepted, because for a deed to be accepted it requires two conditions. Which is the intention which is purely for Allah and in accordance with the sharee'ah of Prophet Muhammad. The three categories of Tawheed in Islam that are very important to abide by which are Tawheed Ruboobeeyah which means maintaining the oneness of Lordship that is, affirming that Allah is one, without partners in his power, as Allah states in the Quran "And no calamity strikes except by Allah's permission." This means that without Allah's permission no one can do anything. Second one is Tawheed al-Asmaa' was-Sifaat which means maintaining the unity of Allah's Names and Attributes that is, affirming that they are incomparable and unique as Allah says in the Quran for Muslims that "There is nothing like him." ...read more.